Beckham will play for Real Madrid against Zaragoza despite injury

David Beckham will play for Real Madrid at Zaragoza on Saturday despite a left ankle injury. 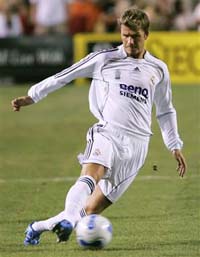 Beckham will play for Real Madrid against Zaragoza despite injury

"I'm going to travel to Zaragoza and I'm going to play," Beckham, who did not train with the team Friday, told sports daily Marca.

Beckham could win his first major trophy with Madrid if the team beats Zaragoza - and FC Barcelona and Sevilla lose - this weekend. Madrid leads two-time defending champion Barcelona on head-to-head results. Both have 72 points, two more than Sevilla, with two games to go.

The England midfielder was hit on the ankle early in his team's European Championship qualifying win over Estonia.

"It hurts but I want to play," Beckham said.

"I hope he gets better. David wants to play the last two matches that he has left with Real Madrid, and I know he will, with that mind-set," Madrid striker Ruud van Nistelrooy said.

After the season, Beckham will head to the United States to play for the Los Angeles Galaxy.

"Beckham has been very important for us down the home stretch and he wants to leave here with a title. It would be a dream come true for all of us," Van Nistelrooy added.