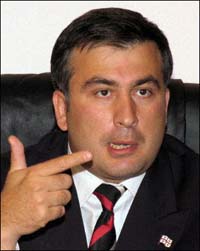 The 145-2 vote underscored the Georgian leadership's dedication to cultivating close ties with the United States. Saakashvili has courted the West and sought to lessen the influence of neighboring giant Russia, which dominated Georgia for most of the past two centuries.

Georgia first sent a group of 70 servicemen to Iraq in August 2003, six months before Saakashvili's election, and nearly 900 soldiers, medics and military support staff from the Caucasus Mountain nation now serve with the U.S.-led coalition.

After the vote, parliament speaker Nino Burdzhanadze lavishly praised the United States, which has trained Georgian forces and has signaled support for the government in its efforts to shed Russian influence. U.S. President George W. Bush visited in 2005.

"It is very important that Georgia knows the price of peace and stability and ... knows the price of friendship, and will never forget the support that has been provided by that people, which understands Georgia's problems as its own," Burdzhanadze said.

The Defense Ministry said a brigade of 2,000 servicemen will be involved in peacekeeping operations in Kut, 160 kilometers (100 miles) southeast of Baghdad. The additional servicemen are to be sent to Iraq by the end of September, with the first expected to arrive in early July, it said.