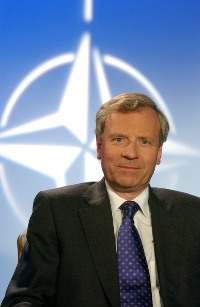 "It's a bit early to judge if an Azeri radar could be the answer to the threat," said Secretary General Jaap de Hoop Scheffer. "It's a bit close to the rogue states we are discussing."

The oil-rich former Soviet republic of Azerbaijan borders Iran, which the U.S. says is the main target of its plan to install 10 anti-missile interceptors in Poland and a radar base in the Czech Republic.

Putin, who had bitterly opposed plans by the U.S. to locate an extension of its missile shield in eastern Europe, told U.S. President George W. Bush on Thursday that Moscow could drop its objections if part of the system were installed in Azerbaijan.

Despite his caution, de Hoop Scheffer welcomed the talks between Bush and Putin at the G-8 summit in northern Germany, which diplomats say marked a thaw in relations after weeks of mounting tension over the missile defense shield, which led to Putin's threatening to point Russian warheads at Europe for the first time since the Cold War.

"That they talk to each other is good," he told a conference organized by the Security and Defense Agenda, a Brussels-based think tank.