NASA is scheduled to launch Atlantis on Friday as its first space shuttle mission of the year, and there were no signs of bad weather or technical problems to delay it. 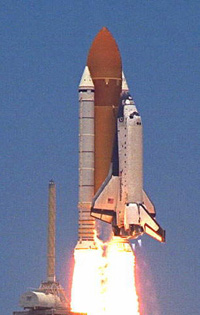 Forecasters predicted an 80 percent chance that the weather would allow NASA to launch Atlantis at 7:38 p.m. (2338 GMT). Engineers were not working on any technical problems, Steve Payne, NASA test director, said Thursday.

A freak storm set back the mission in late February, when golf-ball-size hail knocked thousands of pockmarks in the insulating foam of Atlantis' external tank as it stood on the launch pad.

NASA managers chose to repair the tank rather than swap it out for another, and scores of engineers and technicians worked over two months to remove, sand down and reapply foam to the tank.

While NASA managers praised the technicians for their work on the tank, they kept a wary eye on another set of workers who may strike as early as this weekend.

Almost 570 machinists and aerospace workers at the Kennedy Space Center last week rejected a contract offer from United Space Alliance, NASA's primary contractor for the space shuttle. Few of the workers who might strike have any direct role in the final preparations for space shuttle launches, and NASA officials have said other employees could fill the roles of striking workers if necessary.

"It's not our intention to stop a shuttle launch," union business representative Johnny Walker said Thursday afternoon. He said the union is considering putting up picket lines, but also making arrangements to allow union members outside of Kennedy Space Center to keep working on Atlantis' flight.

During the 11-day mission, Atlantis and its seven astronauts will deliver a new segment and a pair of energy-producing solar panels to the international space station.

Astronaut Clay Anderson will replace astronaut Sunita Williams as the U.S. representative at the orbiting outpost.

NASA hopes to fly at least 13 more construction missions to the space station before the space shuttle fleet is grounded in 2010. The space agency also wants to fly a single mission to repair the Hubble Space Telescope, which officials said Thursday would be in September 2008.