Italian satellite blasts off from California coastal base 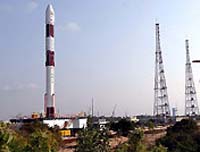 Italian satellite blasts off from California coastal base

An Italian satellite reached space on a mission to image the Earth.

The COSMO satellite, developed for the Italian Space Agency and Italian Ministry of Defense, was boosted into orbit at 7:34 p.m. PDT Thursday (0234 GMT Friday) after being launched aboard a Boeing rocket from the Vandenberg Air Force Base.

The satellite, which carries a radar imager, will be part of a constellation of four orbiting probes that will collect data on floods, droughts, earthquakes and landslides. It is the first to be launched, and a second was expected to lift off from Vandenberg later this year.

Italian space officials expect the fully functional system to beam back up to 1,800 images of the Earth a day.