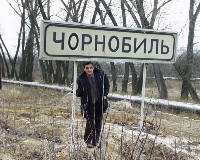 Two decades passed from the time when an explosion and fire at the nearby Chernobyl nuclear power plant sent clouds of radioactive particles drifting over the fields near her home. But little by little wilderness started encroaching.

Packs of wolves have eaten two of her dogs, the 73-year-old told a visitor in May, and wild boar trample through her corn field. Meanwhile, she said, fox, rabbits and snakes infest the meadows near her tumbledown cottage.

"I've seen a lot of wild animals here!" said Urupa, one of about 300 mostly elderly residents who insist on living in Chernobyl's contaminated evacuation zone.

The return of wildlife to the region near the world's worst nuclear power accident, first reported more than a decade ago, is an apparent paradox that biologists are still trying to measure and understand.

Many assumed the 1986 meltdown of Reactor Number Four, and the release of hundreds of tons of radioactive material, would turn much of the 1,100-square-mile (2,850 square kilometer) evacuated area around Chernobyl into a nuclear dead zone.

Dense forests have reclaimed farm fields and apartment house courtyards. Residents, visitors and some biologists report seeing wildlife - including moose and lynx - rarely sighted in the rest of Europe. Some birds even nest inside the cracked concrete sarcophagus shielding the shattered remains of the reactor itself.

Wildlife has returned despite radiation levels in much of the evacuated zone that - although they have fallen significantly since the accident due to radioactive decay - remain 10 to 100 times higher than background levels, according to a 2005 U.N. report.

Some researchers insist that by halting the destruction of habitat, the Chernobyl disaster helped wildlife flourish. Others say animals may be filtering into the zone, but that they appear to suffer malformations and other ills that threaten to send their tenuous populations crashing.

Both sides say more research is needed into the long-term health of a variety of Chernobyl's wildlife species, as governments around the world consider switching from fossil fuel plants, blamed for helping drive global climate change, to nuclear power.

Biologist Robert J. Baker of Texas Tech University was one of the first Western scientists to report that Chernobyl had become a wildlife haven. He says the mice and other rodents he has studied Chernobyl since the early 1990s have shown remarkable tolerance for the region's elevated radiation levels.

But Timothy Mousseau of the University of South Carolina, a biologist who studies barn swallows at Chernobyl, says that while wild animals may filter into the area from outside, they have struggled to build new populations here.

Far from thriving, he says, a high proportion of the birds he and his colleagues have examined suffer from radiation-induced sickness and genetic damage. Survival rates are dramatically lower for those living in the most contaminated areas.

In explaining their starkly differing views, Baker and Mousseau criticize each other's studies as poorly designed.

But their disagreement also reflects a deeper split among biologists who study the effects of exposure to radiation. Some, like Baker, think organisms can cope with the destructive effects of radiation up to a point - beyond which they begin to sufferirreparable damage. Others believe that even low doses of radiation can trigger cancers and other illnesses.

In the Journal of Mammology in 1996, Baker and his colleagues reported that the disaster had not reduced either the diversity or abundance of a dozen species of rodents - including mice, shrews, voles, rats and weasels - near the Chernobyl plant.

"Our studies show that a dynamic ecosystem is present in even the most radioactive habitats," they wrote.

Genetic tests showed Chernobyl's animals suffered some damage to their DNA, Baker and his colleagues reported. But they said overall it didn't seem to hurt wildlife populations.

"The resulting environment created by the Chernobyl disaster is better for animals," Baker told the Associated Press in a phone interview.

Critics of Baker point out that his work has been funded by the U.S. Department of Energy, which some view as pro-nuclear. Baker defended the government connection, saying "we have never been asked to come up with any specific conclusions, just do honest work." He also said his work has been peer-reviewed.

Mousseau and his colleagues have painted a far more pessimistic picture.

In the journal Biology Letters in March, a group led by Anders Moller, from Pierre and Marie Curie University in Paris, said that in a study of 7,700 birds examinedsince 1991 they found 11 rare or unknown abnormalities in a population of Chernobyl's barn swallows.

Roughly one-third of 248 Chernobyl nestlings studied were found to have ill-formed beaks, albino feathers, bent tail feathers and other malformations. Mousseau was a co-author of the report.

In other studies, Mousseau - whose work is funded by the National Science Foundation and National Geographic Society - and his colleagues have found increased genetic damage, reduced reproductive rates and what he calls "dramatically" higher mortality rates for birds living near Chernobyl.

The work suggests, he said, that Chernobyl is a "sink" where animals migrate but rapidly die off. Mousseau suspects that relatively low-level radiation reduces the level of antioxidants in the blood, which can lead to cell damage.

"From every rock we turn over, we find consequences," he told the Associated Press in a phone interview. "These reports of wildlife flourishing in the area are completely anecdotal and have no scientific basis."

While the experts debate, Maria Urupa, one of about 350 so-called "self-settlers" who defied authorities and moved back to their homes inside the exclusion zone, harvests tomatoes from her garden, buys fish from the nearby Pripyat River and brews her own moonshine vodka.

Eating locally-produced food is risky, health experts agree, because plants and animals can concentrate radioactive materials as they cycle through the food chain. Doesn't she fear the effects of her exposure to radiation?