Australia's leader is pushing an Asia-Pacific strategy to fight global warming that avoids setting pollution emission targets, saying countries such as China and India would balk at any measures that challenge their economic booms. 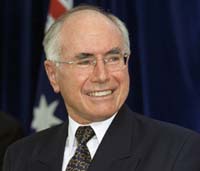 Prime Minister John Howard, who in September will host this year's summit of the 21 leaders of the Asia Pacific Economic Cooperation forum, said in a speech late Wednesday that the meeting would be an opportunity to create a new, "practical" consensus on tackling climate change.

The consensus would be "more comprehensive" than the Kyoto Protocol, the 1997 global pact on reducing greenhouse gases that Australia has refused to ratify and that Howard described as a "Euro-centric" solution that "won't fly in a rising Asia-Pacific region."

But no agreement would be reached if the forum sought to impose hard-and-fast rules upon the member economies, he said.

"APEC works best when it sets a broad, shared objective without seeking to be overly prescriptive about how member economies should pursue it," Howard said in written copies of the speech released Thursday.

As an alternative to mandated emission targets, Howard proposed a model in which countries set their own objectives in a range of areas that effect climate change, and review their own progress.

Objectives could be emission targets, or deadlines for adopting cleaner technologies or achieving energy efficiencies.

"Pledges would typically be reviewed after a period of time, with a view to promoting additional action," Howard said.

He said the strategy must recognize national aspirations for economic growth and energy security.

"No country, least of all rising economic superpowers like China and India, is going to embrace measures that imperil these objectives," he said.

"John Howard's going for a polluters' club here, with the rules being you set your own limits for pollution and there'll be nobody else to point the finger at you," Brown told Australian Broadcasting Corp. radio Thursday.

The opposition Labor Party has vowed to join Kyoto and set a target of slashing Australia's greenhouse pollution by 60 percent by 2050 if it wins elections due late this year.

Howard, a longtime opponent of Australia accepting emission targets as long as the United States, China and India do not, announced this week that his country would set its own target next year and achieve it through carbon trading by 2012.

But he said Thursday that Australians will not accept higher charges for electricity that must come as the nation moves to clean-coal technology or nuclear power generation unless the rest of the world did the same.