Amid tense ties, Bush and Putin ready for one-on-one meeting in Germany

Is a tense meeting in the cards Thursday for U.S. President George W. Bush and Russian President Vladimir Putin? "Could be," even Bush admits. 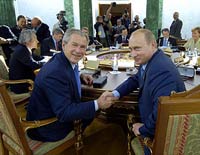 Amid tense ties, Bush and Putin ready for one-on-one meeting in Germany

The leaders saw each other Wednesday night for the first time since their dispute over putting a U.S. missile defense system in Eastern Europe flared into Cold War-style rhetoric and sent Russia-U.S. relations sliding to their lowest point in decades.

Bush and Putin are attending a summit of the G-8, the world's eight major industrialized democracies, which opened with an evening of cocktails, dinner and entertainment with spouses at a rural manor.

Washington is getting fed up with Putin for overseeing what the U.S. perceives as an era of muzzled dissent.

Bush this week put Russia on a par with China, calling U.S.-Russian ties "complex" and criticizing democracy as being "derailed" under Putin.

The remarks carried extra sting because they were delivered publicly and in the Czech Republic. The former Soviet satellite threw off communism in 1989 and is a NATO member, along with other Eastern European nations - which has become a thorn in Russia's side.

The stepped-up criticism from Bush came as Moscow offers strong objections to the proposed missile shield.

Even Putin's warning that a new shield could require Russia to retarget missiles toward Europe earned only a muted reaction from Bush. He dismissed Putin's bellicose talk, suggesting it could be bluster intended more for internal political consumption in Russia, which holds elections next year.

There are other items on the disagreement list, notably Russia's unhappiness with U.S. support for independence for the breakaway Serbian province of Kosovo. Russia bristles at what it sees as U.S. meddling in its affairs and its traditional sphere of influence.

Moscow has shown more willingness of late to help the West take on Iran over its nuclear program. Washington wants to preserve this momentum.

The Russians projected a similar air. They said the open hostility was part of a constructive relationship. Yet theyreaffirmed disagreements with Washington's view of Russian democracy and dissatisfaction with its arguments for the shield.

Putin next month will become the first world leader during Bush's presidency to come to the Bush family's summer compound on the Maine coast. The two _ once so close in the aftermath of the Sept. 11, 2001, attacks - last met in November, in Hanoi, Vietnam.

Bush was beginning his day with a farewell meeting with departing British Prime Minister Tony Blair.

Blair, the president's closest ally in Europe, is holding out hope that he can bridge an impasse between Bush and some of the other countries over climate change. German Chancellor Angela Merkel, as summit host, is pushing for specific, binding targets for reducing carbon emissions; Bush is against them.

In between, Bush and the other leaders planned to discuss issues ranging from Africa aid to trade and Lebanon.

The rhetoric began this year when the U.S. chose the Czech Republic and Poland as the missile defense sites and roused Russian suspicions.

Bush is visiting both countries on his eight-day European trip. He has insisted the shield is planned to block any future Iranian nuclear missiles, not Russian ones.

Putin spokesman Dmitri Peskov said these were "insufficient explanations" and promised "uncomfortable consequences," such as possible missile retargeting, if the shield is deployed "next to our borders" without more acceptable ones.

But, he added: "Russia is the last country in this world who is thinking about confrontation or starting another Cold War."

Simon Serfaty, director of European Studies at the Center for Strategic and International Studies, said Putin is overplaying his hand.

"This is a passing moment of post-imperial nostalgia for Russia," he said.

Stephen Sestanovich, a Russia expert at the Council on Foreign Relations, said Putin needs to tread carefully because Russia's relations with Europe are taking a dive, too. "Will the G-8 meetings deepen this crisis? Almost surely not," Sestanovich said. "The G-8 is not a forum for deepening crises."

The summit is being held under tight security in Heiligendamm on northern Germany's Baltic coast. Some 800 protesters made it to an 11-kilometer (7-mile), razor-wire fence encircling the summit town on Wednesday, while 10,000 more reached areas where demonstrations had been banned.

In addition to the Czech Republic, Germany and Poland, Bush also intends to visit Italy, Albania and Bulgaria.