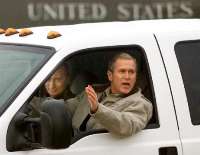 Vladimir Putin looks increasingly alienated among his Group of Eight colleagues after his blunt anti-Western statements and threats of a new arms race. This is his last summit with leaders of the world's richest democracies.

Before heading to the summit in Heiligendamm, Germany, Putin took his bellicose rhetoric to new heights, promising to point Russia missiles at those U.S. allies in Europe who agree to host U.S. missile defense sites.

A threat - unheard of from a Kremlin leader since the Cold War - reflected simmering tensions between the West and an oil-rich and increasingly assertive Russia. The two sides also have clashed over independence for the Serbian province of Kosovo, Russia's human rights record and a Soviet-era treaty on conventional forces.

"Putin is getting prepared to withstand pressure to make Russia more cooperative on missile defense, Kosovo and Iran. In a sense, missile tests were part of these preparations," Pavlovsky told The Associated Press.

Russia-West relations have plunged to their lowest level since the Cold war amid Western concerns about Russia's backsliding on democracy - concerns that have been fueled by the contract-style murder of crusading journalist Anna Politkovskaya and the killing of former spy Alexander Litvinenko with radioactive polonium-210 in London.

Some in the West have questioned whether Russia has a right to sit at the same table with liberal Western democracies.

Putin says Russia has its own model of democracy and accuses the West of hypocrisy. He said that Russia is eager to develop cooperation with the West, but wants to be treated as an equal partner and does not need Western lecturing.

"Russia's policy is driven by false perceptions," said Alexander Konovalov, head of the Institute of Strategic Assessment, an independent Moscow-based think-tank. "Putin thinks that the West wants to weaken him, drive him into a corner. He lives in a virtual world created by secret services memos."

Putin's fiery anti-Western statements play well with the Russian public nostalgic about the Soviet Union's global clout and prestige, as Russia prepares for parliamentary elections this fall and a presidential vote in March.

"A concept of enemies coming from all sides makes it easier to govern a nation," Konovalov told the AP.

While the United States has been Putin's favorite target recently, he also has turned the heat on the misunderstood.

Putin has rejected the EU's call to give foreign investors fair access to Russia's oil and gas deposits and export pipelines, and Russia refused to lift a ban on Polish meat and plant exports that was blocking talks on a new EU partnership agreement. At the latest Russia-EU summit, Putin and German Chancellor Angela Merkel bickered publicly over Russia's record on democracy.

Moscow has shown little interest in tackling global problems at the core of this year's G-8 agenda, such as climate change. Russia has ratified the Kyoto protocol on cutting greenhouse gas emissions, allowing the pact to go into force, but it does not have to take any immediate action now as its industry has yet to reach the limit on emissions imposed by the document.

"Russia is largely indifferent to the Kyoto process," said Fyodor Lukyanov, the editor of Russia in Global Affairs magazine.

Differences over global crises have added to mistrust between Russia and the West. Moscow has categorically rejected a Western-backed plan for Kosovo independence and threatened to veto it at the U.N. Security Council if the U.S. and its allies press for a quick vote.

Russia has opposed tougher sanctions on Iran, but recently signaled that it could edge closer to the Western stand.

Many analysts say cooperating on Iran and other global issues, along with intertwining economic interests, would help soothe tensions between Russia and the West.

"The split can't be too wide; an economic interdependence would help narrow it," Lukyanov said.

Some also say the Russian elite is too deeply entrenched in the West to wage a new Cold War.

"There is a practical limit to worsening of Russia's relations with the West," Konovalov said. "Members of Russian officialdom are keeping their money in Western banks, they are sending their children to study in the West, they are vacationing and having medical treatment there. And they are buying their real estate in the West, not in Iran."