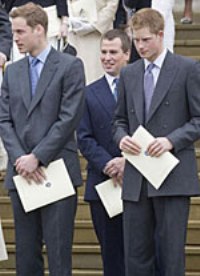 Photos have become an apple of discord for TV channel and Princess Diana's sons. The role of photographers in the death of Princess Diana is the subject of a television documentary scheduled to be broadcast Wednesday.

Channel 4 said it would go ahead with the documentary despite pleas from Prince William and Prince Harry not to show pictures taken at the crash scene in Paris on Aug. 31, 1997.

The princes protested that showing the photographs would be a "gross disrespect to their mother's memory."

"If it were your or my mother dying in that tunnel, would we want the scene broadcast to the nation?" the princes' private secretary, Jamie Lowther-Pinkerton, said in a letter to Channel 4 television which was publicly released on Tuesday.

"Some photographs will be of the scene inside the tunnel but in none of the pictures is it possible to identify Diana or indeed any of the crash victims," Channel 4 said.

"We do not show, nor have we ever considered showing, Diana's final moments."

The program sets out to examine the role of photographers who pursued Diana and boyfriend Dodi Fayed from the Ritz Hotel to the Pont d'Alma tunnel, where the couple's speeding limousine slammed into a concrete pillar.

Channel 4 said its program would ask: "Did the photographers chase Diana to her death in the Pont d'Alma tunnel? Were they too busy taking pictures to call the emergency services and did their presence hinder those services?"

Police inquiries in both France and Britain have already answered "no" to both questions.

In February last year, a Paris appeals court fined those three photographers EUR1 (US$1.35) each for invasion of privacy for taking pictures of Diana and Fayed on the night of the crash.

Fayed's father, Mohamed Al Fayed, filed the invasion of privacy complaint, which focused on three photos of the couple leaving the hotel and three taken after the accident.

Al Fayed claims that the photographers were used as a cover-up for a murder plot orchestrated by the British intelligence services and members of the royal family.

Lord Stevens, a former chief of London's Metropolitan Police, concluded after a lengthy inquiry that the crash was due to the chauffeur being drunk while driving at a high speed to elude photographers.

Herve Stephan, a French examining magistrate, concluded in 1997 there was insufficient evidence to charge any of the paparazzi photographers with involuntary manslaughter or failing to render assistance.

Stevens' report, published in January, said: "There was no evidence to show that the actions of the paparazzi were anything other than their normal working practice and no evidence that showed they were involved in any criminal conspiracy."