The French warship "La Fayette" is in New Orleans this week to celebrate the 250th anniversary of the birth of the Marquis de Lafayette, the French aristocrat who fought in America's War of Independence. 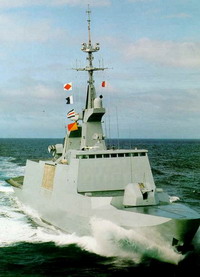 French sailors sounded a 21-gun salute as the frigate arrived at the Port of New Orleans on Tuesday. The U.S. Navy responded with a 21-gun salute of its own - a long-held naval greeting dating back to the 1700s for a ship making its first port of entry in a new country.

The frigate will be docked on the banks of the Mississippi River near the French Quarter through Friday. On Saturday, it departs New Orleans for Tampa, Florida, then Norfolk, Virginia, and Savannah, Georgia.

The ship's officers, led by Capt. Jean-Philippe Rolland, will participate in a wreath-laying ceremony Wednesday in the city's devastated Lower 9th Ward to memorialize the victims of Hurricane Katrina.

Also Wednesday, French naval officials will bestow the "Legion of Honor" - a prestigious French military and civilian honor - on five American World War II veterans in a ceremony aboard the ship.

Born Sept. 6, 1757, the Marquis de Lafayette ignored France's early neutrality during the American Revolution and traveled to the United States, where he fought alongside the Americans. He gained the rank of major general and served under George Washington.

He remained active in French and European politics until his death on May 20, 1834.

On Thursday, French naval officials will visit the Louisiana city of Lafayette, which is about 130 miles (209 kilometers) west of New Orleans.

New Orleans was founded by the French in 1718 and France has centuries-old cultural and economic ties to Louisiana. After Katrina hit in 2005, France hosted Louisiana musicians, giving them rent-free apartments and helping them book performances for months when they had few places to play back home.