A mushroom found in a 100-million-year-old piece of amber is about 20 million years older than other known mushroom fossils. 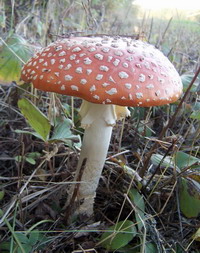 The mushroom was spotted about a year ago in Myanmar, said George Poinar, a retired entomology professor at the University of California, Berkeley, who now lives in Corvallis, Oregon.

The ancient mushroom is especially interesting because it contains two parasites, one feeding on the mushroom and the other feeding on its fellow parasite.

"I was amazed enough with the mushroom," Poinar told The Oregonian newspaper. "But then seeing the parasites was astonishing. No one has ever seen this three-tier association before."

Amber is fossilized tree resin, a sticky substance that oozes from certain pine and legume trees. The resin has chemical properties that act as a natural embalming agent for the ancient creatures that become trapped in it.

"This shows how far back mushrooms - and the parasites that infect them - go," Poinar told the paper.

The ancient specimen is similar to pinwheel mushrooms that grow on the bark of modern trees, he said.

"They dotted the trees 100 million years ago, so they probably were tasty treats for the dinosaurs to nibble on," said Poinar.

Joseph Spatafora, a fungi specialist and a professor of botany and plant pathology at Oregon State University, told the newspaper that the amber discovery is significant because mushroom fossils are rare. Ancient mushrooms - the fruiting bodies of fungi - lack bones or shells, so few survive.

"So the amber specimen can give us a lot of insight to what fungal diversity was at this time in the past," Spatafora said, and gives scientists an idea about fungi's role in forest ecosystems.

Poinar and Buckley reported their discovery in the journal Mycological Research.