A Spanish court has ordered police to detain and search two vessels belonging to a Florida firm that recently announced it had found a shipwreck laden with an estimated 370 million EUR ($500 million) worth of colonial-era treasure. 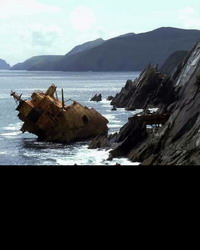 The court in the southern port city of Cadiz instructed police to capture the vessels should they leave the British colony of Gibraltar, on Spain's southern tip, and enter Spanish waters, leading radio Cadena SER and other media outlets said.

The two ships, "Odyssey Explorer" and "Ocean Alert," belong to Odyssey Marine Exploration and are believed to have been involved in the exploration that led to the discovery of the treasure disputed by Spain.

Spain last month filed claims in a U.S. federal court over Odyssey's find, arguing that if the shipwrecked vessel was Spanish or was removed from that country's waters, any treasure would belong to Spain.

Odyssey insists the shipwreck was outside any country's territorial waters but would not give the exact location or name of the ship. Its treasure of gold and silver coins was flown back to the United States from Gibraltar.

Cadena SER said Spanish Civil Guard police were to be posted off Gibraltar port in preparation should the vessels try to leave. The court order said the ships should be taken to a Spanish port so that their holds can be searched. The ships cannot be boarded by Spanish police as long as they remain in Gibraltar.

Culture Minister Carmen Calvo described the order as "magnificent news," and said the Spanish navy would be prepared to help in the capture, if necessary.

"International laws are behind us and if anything outside the law occurred it will have an answer, and what is ours will return to Spain," the national news agency Efe quoted Calvo as saying.

The minister added that Spain had asked Britain and the United States for information regarding the customs papers used by the plane that transported the coins out of Gibraltar.