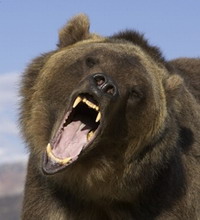 In the spring, the U.S. Fish and Wildlife Service lifted the 32-year-old "threatened" status for the 500 to 600 bears in Wyoming, Idaho and Montana, saying their numbers had recovered.

The environmental groups say the grizzly gene pool is still too small to assure future viability of the species that once roamed the area by the thousands.

Christopher Servheen, a Fish and Wildlife Service biologist who led the grizzly recovery effort, said bears have proved over the last two decades that they can adapt to changes in their food supply. If that changed in the future, he added, wildlife agencies "could respond accordingly" and return grizzlies to the threatened list if needed.

Grizzlies are predators that can stand more than 6 feet (1.83 meters) and top 600 pounds (272 kilograms). In the late 1800s, early European settlers shot, poisoned and trapped them until they were reduced to less than 2 percent of their previous range. When recovery efforts began in the 1970s, as few as 200 grizzly bears survived in the Yellowstone region.

Following a $20 million (14.8 million EUR) recovery effort, federal and state wildlife officials promise close monitoring of the Yellowstone grizzlies to make sure the population does not slide backward. And they say enough of the bear's habitat is protected - about 80 percent of the 9 million acres where they live - to make such a decline unlikely.

The environmental groups say the Yellowstone population needs to be linked up with at least some of those populations to shield against future declines.

"True recovery is connecting up these isolated grizzly bear ecosystems and sustaining a population of 2,000 to 3,000 grizzly bears. And right now, the delisting approach would create a system where that will never happen," said Doug Honnold, an Earth Justice attorney representing the environmental groups.

Servheen disagreed with Honnold's claim. "There is no scientific basis for that number," he said. "The space available and habitat available for bears is sufficient to sustain a population of bears that is viable into the future."

Several other conservation groups, including Defenders of Wildlife and the National Wildlife Federation, have supported the delisting of Yellowstone grizzlies.

"There will always be uncertainties, for any species," said Tom France of the National Wildlife Federation. "But the facts are there to support delisting and the regulatory plans are adequate to protect bears."

With the delisting, management of Yellowstone grizzlies is now shifting to state wildlife agencies in Wyoming, Montana and Idaho. The states are free to hold public hunts.

"Anything that will result in dead bears, we'll try to stop it," Honnold said.