Jessica Cutler, the former Senate aide who had online sex diary and a book deal with a Playboy photo spread was kicked off Capitol Hill. Now she has filed for bankruptcy. 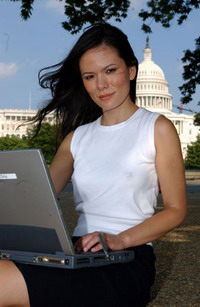 Cutler, a former aide to Republican ex-Sen. Mike DeWine, created the "Washingtonienne" blog in 2004 and began posting racy details about her sex life with six men, including a Senate colleague and "a few generous older gentlemen" who she said paid many of her living expenses.

When the blog was discovered, Cutler was fired. She moved to New York, wrote a novel based on the scandal, posed naked and started a new Web site that describes herself as "a published author who jumps out of cakes for money."

Under the occupation heading of her Web site, it reads: "I'm freelancing."

Cutler has spent much of her time fending off a lawsuit by ex-boyfriend and fellow DeWine staffer Robert Steinbuch, who claims Cutler's blog publicly humiliated him. He is seeking more than $20 million (14.9 million EUR) in damages.

In court documents filed in the case Thursday, however, Cutler says she cannot even pay her American Express bill, legal fees and student loans. She submitted to the judge a copy of a Chapter 7 bankruptcy petition filed in New York dated Wednesday.

The lawsuit is being closely watched by online privacy groups and bloggers because the case could help establish whether people who keep online diaries are obligated to protect the privacy of the people they interact with offline.

Cutler's bankruptcy filing further clouds the fate of a lawsuit already mired in contentious pretrial arguments. A federal judge has encouraged both sides to cooperate and perhaps even settle the case, but both sides are demanding personal information from the other and Steinbuch says he doesn't want to give a videotaped deposition for fear Cutler will post it on the Internet.

Messages seeking comment were left at the office of Steinbuch's attorney and on Cutler's cell phone.