Aid workers in the United States are preparing for what would be the largest Iraqi influx to the U.S. after the Bush administration's decision to accept the first group of Iraqi refugees. 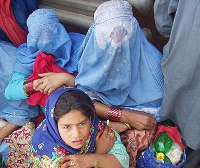 For groups in the Detroit area, which has one of the country's largest concentrations of people from the Middle East and could eventually accept the lion's share of the refugees, efforts include contacting relatives, finding translators, transportation and housing, and fielding donations of furniture, clothing and appliances.

"We are getting prepared here on the ground to make sure once those people start coming that we are fully prepared," said Belmin Pinjic, director of refugee services for the Lutheran Social Services of Michigan. The group is the local affiliate for Lutheran Immigration and Refugee Services and Episcopal Migration Ministries, two of ten resettlement agencies working with the State Department.

The U.S. Department of Homeland Security said this week it has approved the applications of 20 cases involving 59 Iraqis, and they should be arriving in the "coming weeks." It did not give details of where they would settle.

The department is interviewing refugees for potential resettlement and has already completed interviews for more than 300 cases affecting more than 700 people.

The 59 Iraqis who have been approved are among a group considered to be the most vulnerable and for whom resettlement interviews have already been conducted, the department said.

The Bush administration said February it will allow up to 7,000 Iraqis into the U.S. by September up from 202 in 2006 and will pay more to help Iraq's neighbors cope with the surge of refugees.

The head of the U.N. refugee agency has said the number is preliminary and could be expanded further by the end of the year. An estimated 2 million have sought asylum in countries such as Jordan, Syria and Turkey.

Pinjic said the Lutheran Social Services of Michigan have received data on numerous refugees recommended for resettlement, and was calling relatives locally to see if they are still willing to accept them.

Likewise, he said government officials have not disclosed where the refugees are headed. But Pinjic and others expect that as many as half will, at some point, come to the Detroit area.

Iraqi community leaders in Los Angeles and Orange County, which also have large Iraqi populations, said they had not yet heard of any refugees being settled in the area, but hoped they would be soon.

Imam Mostafa Al-Qazwini, leader of the Islamic Educational Center of Orange County, said he helped with the last wave of refugees resettled after the 1991 Gulf War. He said mosques in Southern California provided English classes, health services and financial help to new arrivals and he expected they would be ready and willing to do so again when asked.

While glad that some refugees were being resettled, he expressed frustration that so few were coming.

"Fifty-nine people is too little, too late. What's the big deal about 59 coming here when we have hundreds of thousands of people in Syria, Jordan, Iran and others displaced inside Iraq?"

Nashville, which is home to the nation's largest community of expatriate Kurds, estimated to number 8,000, also is bracing for a wave of refugees. Kurds were a persecuted minority under Saddam Hussein's rule, as were Shiites who comprise the majority of Iraq's population.