Kenyan president Mwai Kibaki:"Those behind recent killings in Kenya do not have a right to live"

Those behind a recent spate of killings in Kenya do not have "a right to live," President Mwai Kibaki said in his strongest comments. 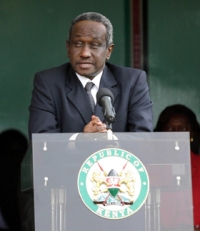 Kenyan president Mwai Kibaki:"Those behind recent killings in Kenya do not have a right to live"

Kibaki did not name the Mungiki sect, the outlawed group believed behind at least 12 killings in the past three months. The bodies of six of the victims were found mutilated a week ago on the outskirts of the capital.

The criminals act as if they had a right to kill, Kibaki said.

"No one has such a right and if you do that and hide wherever you can, we will get you. Now there is nobody who will think that person has a right to live," Kibaki said in off-the-cuff remarks in Kenya's national language, Kiswahili, during celebrations to mark the anniversary of the country's partial independence from British colonial rule on June 1, 1963.

On Thursday, government spokesman Alfred Mutua said in recent months police have arrested 2,464 suspected Mungiki followers. Mungiki, which means multitude in the Kikuyu language, emerged in the 1990s and was inspired by the Mau Mau rebellion of the 1950s against British rule.

The violence has raised fears that Mungiki members are out to disrupt the general elections in December, when Kibaki will seek a second term. About two weeks ago, police said they had found leaflets allegedly circulated by the group asking young Kenyans to prepare for an uprising against the government.

"There are people who have been responsible for those killings and we know who they are," Kibaki said, without naming anyone. "There is no criminal who will be able to escape."

Leaflets have appeared in the capital in recent days claiming the sect would expose high-level government officials and lawmakers among its members at a rally Friday in a poor Nairobi neighborhood. But the only people to show up at the proposed rally grounds Friday were uniformed police. A large number of plainclothes police officers also patrolled the grounds as well as downtown Nairobi.

Leaders of the sect rarely talk to journalists and were not immediately available for comment.

The motives or people responsible are unknown, Kiraithe said: "We can't say whether it is Mungiki. Investigations are in their infancy stages."