Parents of missing British girl to meet with Spanish minister 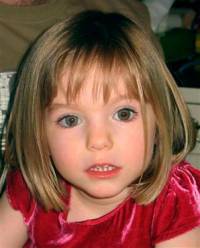 Parents of missing British girl to meet with Spanish minister

Madeleine McCann’s parents took their campaign to find the girl to Spain, where they were to meet with a government minister and child welfare groups.

Four-year-old Madeleine McCann disappeared May 3 when her parents left her and her 2-year-old twin siblings in their hotel room while they went to a restaurant in their hotel complex in Praia da Luz, a resort town in Portugal's Algarve region.

Since then, parents Kate and Gerry McCann have launched an international campaign with the aid of celebrities such as soccer star David Beckham and J.K. Rowling, author of the Harry Potter series, in the hope of finding the girl. The couple had a brief meeting with Pope Benedict XVI on Wednesday.

Kate and Gerry McCann, who arrived in Madrid late Thursday, were to have a private meeting with Interior Minister Alfredo Perez Rubalcaba and appear on Spanish national television. They were also to hold a midday news conference.

Saying they do not plan to return to Britain without their daughter, the parents also plan trips Germany, the Netherlands and Morocco. Sources close to the couple say they feel these countries are important because they are either close to the Algarve or have a population which travels to southern Portugal for holidays.

Last week, Portuguese police announced they were searching for a white man, between the ages of 35 and 40, who was wearing a dark jacket and light beige trousers and who was possibly carrying a little girl on May 3 in Praia da Luz.