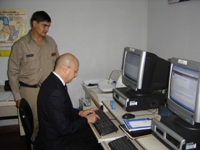 Front-line officers should be given direct access to Interpol databases and services, Interpol officials from throughout Europe agreed during an annual regional conference in the Black Sea city of Varna, Bulgaria.

"Interpol's tools to enhance global security, such as the database of lost and stolen documents, can only be fully effective when made available to all police officers everywhere," Interpol Secretary General Ronald K. Noble said.

Interpol, based in Lyon, France, is the world's largest international police organization, with 186 member countries. Created in 1923, it facilitates cross-border police cooperation and supports authorities and groups in preventing or combatting international crime.

"The political structure of Europe is constantly evolving, but the challenges facing law enforcement remain the same," Noble said.

The academy is slated to open in 2009, and is billed as the first international school to focus on fighting corruption.