George W. Bush names next president of the World Bank 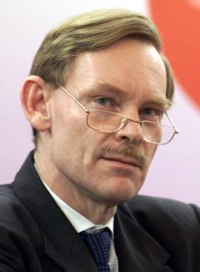 George W. Bush names next president of the World Bank

Zoellick, 53, would succeed Wolfowitz, who is stepping down June 30 after findings by a special bank panel that he broke bank rules when he arranged a hefty compensation package in 2005 for his girlfriend, Shaha Riza, a bank employee.

The controversy which had caused a staff revolt and strained U.S. relations with Europeans and other countries had led calls for Wolfowitz to resign from the poverty-fighting institution.

In announcing the choice of Zoellick, Bush also had praise for Wolfowitz's performance as head of the bank.

A seasoned veteran of politics both in the Washington milieu and on the international stage, Zoellick is known for pulling facts and figures off the top of his head. He also has a reputation for being a demanding boss.

Bush's selection of Zoellick must be approved by the World Bank's 24-member board.

Internationally, the reaction was generally positive, although some health groups and others expressed misgivings about his ability to carry out the institution's mission.

Zoellick announced last June that he was leaving his post as deputy secretary of state to join the Wall Street firm of Goldman Sachs and work to develop investment markets around the world.

If ultimately approved as World Bank chief, Zoellick will need to regain trust, rebuild credibility and mend frayed relations inside the institution as well as with its member countries around the world.

The bank's new leader will have to persuade countries to contribute nearly $30 billion (EUR22.4 billion) over the next few years to fund a centerpiece bank program that provides interest-free loans to the world's poorest countries.

Zoellick could build upon strong relations he has developed worldwide as deputy secretary and U.S. Trade Representative. He was involved in peace talks in Sudan, and as USTR he played a key role in negotiations to bring China into the World Trade Organization. He forged free trade deals between the United States and other countries, including Singapore, Chile, Australia and Morocco.

Before taking the helm in 2005, Wolfowitz was the No. 2 official at the Pentagon and played a major role in mapping out the war in Iraq. From the beginning, Europeans and others were upset that Bush would pick someone to run the bank who was so closely associated with the war.