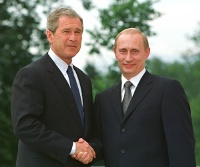 With U.S.-Russian relations under heavy strain, President George W. Bush and President Vladimir Putin will meet July 1-2 in a U.S. sea resort for a wide-ranging discussion of world affairs.

The two also will see each other next week in Heiligendamm, Germany, during the annual Group of Eight summit of industrialized nations.

The U.S. meeting will be at Kennebunkport, Maine, in the far northeastern United States, where Bush's father, former President George H.W. Bush, has an oceanfront compound.