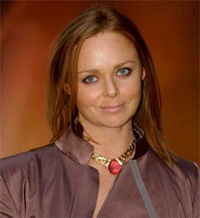 Portman, 25, makes a cameo as a ghost in the video for "Dance Tonight," a track from McCartney's new studio album, "Memory Almost Full." The video had its world premiere Wednesday on YouTube.com.

"The connection with Natalie came from my daughter Stella, who makes non-leather shoes that Natalie buys, so I just thought, `Well, I'll ring her up and just see if she'll do it.' So I rang her up and said, `Hey, I'm Stella's dad!"' the 64-year-old former Beatle said in a statement posted on his Web site.

Portman, whose screen credits include the new "Star Wars" trilogy, "Closer" and "V for Vendetta," plays a "futurist electronic ghost" who is summoned by the sound of McCartney's mandolin.

McCartney last released the acclaimed "Chaos and Creation in the Backyard," in 2005.