Hundreds gathered Thursday to pay tribute to Yolanda "Yoki" Denise King, the eldest daughter of the Rev. Martin Luther King Jr. who carried on his legacy through her art and activism. 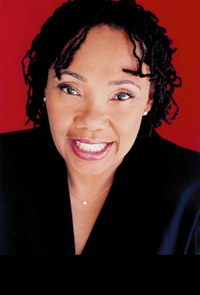 Her sister, Bernice, and brothers Martin and Dexter each lit a candle in her memory. Several veterans of the civil rights struggle attended, including Rep. John Lewis, former Atlanta Mayor Andrew Young and the Rev. Joseph Lowery.

Yolanda King died May 15 in California after collapsing.

Many in attendance did not know the 51-year-old actress, producer and motivational speaker, but came to pay tribute to the King family's legacy of nonviolence and social justice. She was eulogized at Ebenezer Baptist Church, where her father preached from 1960 until his assassination in 1968.

"She dealt with the difficulty of personal pain and public responsibility and yet ... she emerged from it all victorious," said the Rev. Raphael Warnock, pastor of Ebenezer. "Thank you for her voice."

Poet Maya Angelou wrote a tribute that was read during the memorial service.

"Yolanda proved daily that it was possible to smile while wreathed in sadness," Angelou wrote. "In fact, she proved that the smile was more powerful and sweeter because it had to press itself through mournfulness to be seen, force itself through cruelty to show that the light of survival shines for us all."

Children of Martin Luther King Jr.'s lieutenants in the Southern Christian Leadership Conference were among those to remember their lifelong friend.

"It's strange to be here today, without your smiling face," said Abernathy, daughter of King's right-hand man, Ralph David Abernathy. "You are my oldest friend, whom I met in the crib."

"She could make anything sound like Shakespeare," Omilami said. "She was more than an actress. She was an actress on a mission."

Omilami vowed to use King's example to keep pursuing her own dreams and urged mourners to do the same.

"Don't wait. If you got that one thing in your heart that you really want to do ... she showed us the way," Omilami said. "Go and do it and be."

Yolanda King was also honored by former classmates from Grady High School in Atlanta and Smith College in Langhorne, Pennsylvania.