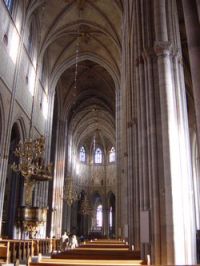 To honor the memory of the famous 18th century scientist Carl Linnaeus, who developed the modern classification of plants and animals, Japanese and Swedish royals joined celebrations Wednesday.

The yearlong festivities, marking the 300th anniversary of his birth, peaked in this traditional seat of learning and religion, some 70 kilometers (45 miles) north of the capital Stockholm. The celebrations included a memorial service, speeches, parades, flower displays and a meeting of Linnaeus descendants from around the world.

Japan's Emperor Akihito and Empress Michiko, on a European tour, joined some 70 dignitaries that included scientists and government officials, at a memorial service in the 12th century Uppsala Cathedral where the scientist is buried.

The Japanese couple, who were accompanied by Swedish King Carl XVI Gustaf, Queen Silvia and Crown Princess Victoria into the church, were greeted by a shower of camera flashes during a rare visit abroad.

After a brief wreath-laying ceremony at Linnaeus' burial place, the 500-strong congregation stood as trumpeters played a fanfare while the royal couples seated themselves.

"You are the sorter of the richness in nature," Johansson said. "You realized that the human being has a responsibility for the nature it affects."

Often called the father of taxonomy, Linnaeus was one of the most significant scientists of his time. He laid the foundation for a new classification of plants and animals based on their reproductive systems.

It is thanks to him that humans are called Homo sapiens in the world of science and are classified as primates in the class of mammals, Mammalia.

By the time he was 30, Linnaeus had written a number of the works that made him famous in the world of science, including Systema Naturae, which classified 4,400 species of animals and 7,700 species of plants when it reached its 10th edition in 1758.

His ideas have influenced generations of scientists, including Charles Darwin, and even those opposed to the philosophical and theological roots of his work.