Saudi Arabia urges U.S. not to tamper with Iraq's identity 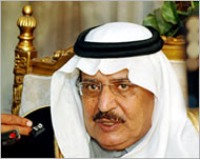 Saudi Arabia urges U.S. not to tamper with Iraq's identity

Naif stressed in remarks he made late Sunday that the six-nation Gulf Cooperation Council "aims to bring Iraq back to what it was as a whole entity that is independent and whose people are united and that it remain an Arab and Muslim country."

"No doubt the Arab countries, especially those neighboring Iraq, are working toward that," said Naif at the closing session of a meeting of the GCC's interior ministers.

"But since there is big participation from outside the Arab world, those involved should return Iraq to what it was before they entered it," added Naif in a clear reference to the U.S.-led coalition that toppled Saddam Hussein's regime in 2003.

Naif did not elaborate, but his comments reflected the deep suspicion felt by Saudi Arabia and other predominantly Sunni countries towards the Shiites and Kurds who have dominated rule in Iraq since the fall of Saddam's Sunni-led government.

Saudi Arabia fears Iraq's Shiite-led government is too closely tied to Iran and is helping spread Tehran's power in the Middle East. Saudi Arabia recently snubbed a request from Iraq's Shiite Prime Minister Nouri al-Maliki, whose Dawa Party is known to have close links to Iran, to visit the kingdom.

The Sunni-led governments of the Arab world blame Iraq's Shiite leadership for fueling the country's violence by discriminating against Iraq's Sunni Arab minority.

At a summit of Arab leaders in Saudi Arabia in March, Arab states took a tough line on Iraq, demanding it change its constitution and its military to include more Sunnis and end the program that uprooted former members of Saddam's regime.

Key Arab leaders have told al-Maliki he needs to step up reconciliation efforts to include Sunni insurgents if he expects Arab support.

Iranian officials insist their country's goal is to help the resolve the Middle East's concurrent crises and wants to be part of the solution.