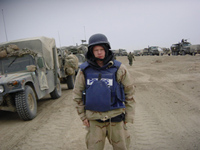 The attack on Ali Khalil, 22, occurred Sunday in Baiyaa, an increasingly volatile neighborhood in Baghdad, according to the Azzaman newspaper. The newspaper, which did not give more details of the attack, was printed with a long black bar across its front page in mourning for Khalil.

"Khalil was one of the most prominent reporters of the newspaper," the newspaper wrote. "Throughout years of his work, he was known to be keen, committed and hardworking."

He is survived by his wife and one-week-old baby, the newspaper said.

The attack came three days after two Iraqi journalists working for ABC news were ambushed and killed on their way home from work.

Nearly 80 percent of the journalists killed were Iraqi, according to CPJ.