U.S. forces on a raid in northern Baghdad killed a Shiite militant believed to have been the mastermind of a brazen attack in Karbala. 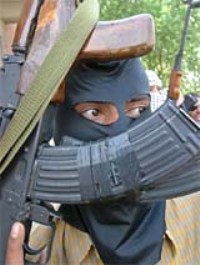 Speaking on CNN's "Late Edition," Maj. Gen. William Caldwell, the spokesman for the U.S.-led forces in Iraq, said U.S. troops had been pursuing Azhar al-Dulaimi "relentlessly," since the Jan. 20 attack.

The attackers killed one soldier and abducted four others, whom they later shot to death.

"You know, anybody who kidnaps an American soldier and murders them, we're going to continue to hunt down. And that's exactly what we've been doing with this guy," Caldwell said of al-Duleimi.

Troops located al-Duleimi on Friday morning and tried to capture him, but he was killed in the ensuing battle, Caldwell said.

News of the U.S. raid came as thousands of soldiers continued searching for three of their comrades who were captured in an ambush by insurgents south of Baghdad last week that also killed four other soldiers and their Iraqi interpreter.

Caldwell said the military would not abandon the search for the missing soldiers until it discovers what happened to them.

"We're not going to give up on our soldiers. We have every reason to believe at this point still that they probably are alive," he told CNN. "There's nothing to indicate otherwise. And so we're going to continue what we're doing."