Alaska elephant has problems with health

Zoo keepers have put Alaska's only elephant in a sling until they find out the reason for her inability to get back up after lying down. 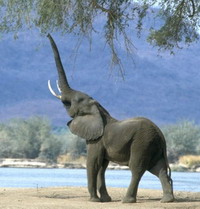 Alaska elephant has problems with health

The sling is providing Maggie the elephant relief from her 8,000-pound (3,600-kilogram) bulk if she wants to get off her feet, zoo director Pat Lampi told the Anchorage Daily News.

The elephant on Sunday and again Wednesday lay down in her enclosure and could not lift herself off the concrete floor. If an elephant is on the ground for too long, muscles, kidneys and other internal organs can be damaged because of its weight. Anchorage Fire Department firefighters used straps and a winch to hoist the animal to her feet both times.

The incidents renewed calls by animal advocates to relocate Maggie to a warmer locale where she can exercise in a more natural environment and be around other elephants. Critics said Maggie's lack of exercise might be causing degenerative muscle problems or arthritis.

Now, zoo officials are awaiting results of a second round of blood work. The initial round, taken after the elephant was found lying on her side the first time, showed nothing abnormal, Lampi said.

Putting large animals in slings to help them recoup is standard veterinary practice, said Dr. Susan Mikota, a Tennessee veterinarian and director of research for Elephant Care International, which focuses on elephant health and conservation issues. Mikota is keeping abreast of Maggie's status, she said.

Slings commonly have been used on horses but also on giraffes and elephants, she said. A captive elephant was kept in a sling for a month while it recovered from tetanus, Mikota said.