Europe breathed a sigh of relief at Paul Wolfowitz's decision to leave the World Bank and urged the quick selection of a strong successor. 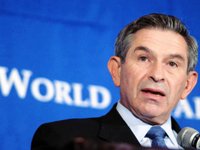 Wolfowitz announced on Thursday that he would step down at the end of June, his leadership undermined by a furor over the pay package he arranged in 2005 for his girlfriend Shaha Riza, an employee of the bank. European officials had pressed for him to go as the dispute extended over recent weeks.

"With his resignation, Paul Wolfowitz is doing the World Bank a service and clearing the way for this global development cooperation institution to recover its credibility," said German Development Minister Heidemarie Wieczorek-Zeul, whose country holds the European Union presidency. "The bank must quickly recover its full ability to act."

Wolfowitz deserved "thanks and recognition for his commitment to fighting world poverty and the future of Africa," Wieczorek-Zeul said in a statement. But she insisted that his resignation had become "necessary."

Britain's international development secretary, Hilary Benn, declared himself "relieved that this damaging time for the bank is finally over."

"The bank's task now is to renew its efforts to lift people out of poverty," Benn said in a statement.

In Brussels, the European Commission the EU's executive branch urged that a successor be appointed as soon as possible, saying "stable and strong political leadership at its top is important."

By tradition, the bank has been run by an American, while the International Monetary Fund has been run by a European. The Bush administration keenly wanted to keep that decades-old practice intact as it dealt with the Wolfowitz situation.

Ute Koczy, a development policy spokeswoman for Germany's opposition Greens, argued that it was time to ditch that "wretched tradition," but a spokesman for Chancellor Angela Merkel dismissed the idea.

"There is absolutely no question for the (German) government over the United States of America continuing to fill the top job at the World Bank," spokesman Thomas Steg told reporters in Berlin.

Germany "has no doubt" that the U.S. administration will "make a convincing personnel proposal one that does justice to the demands of the World Bank in this situation," Steg said.

Wieczorek-Zeul called for an open and transparent decision process.

U.S. Treasury Secretary Henry Paulson said he would consult with colleagues around the world in the search for a new World Bank leader suggesting a more consensual approach than previously.

"The quality of the new candidate is the most important thing," said the Dutch minister for development cooperation, Bert Koenders. "Whatever nationality, American or from another continent, the bank needs a leader of the highest quality."

While European officials said the leadership issue must not deflect the bank any longer from helping alleviate poverty and fight corruption, Germany's Wieczorek-Zeul pointed to what she called the need to "learn from experience."

"A close examination of the World Bank's internal leadership structures is now necessary," she said a review that would include strengthening voting rights for the poorest African countries, some of the bank's main clients.

Anti-corruption watchdog Transparency International said the new president's "integrity must be beyond question."

"The World Bank's anti-corruption work is in paralysis, and the crisis will not end simply because Paul Wolfowitz has gone," the group said in a statement.

"His departure must be followed by an intensified effort to integrate the fight against corruption across the breadth of the bank's work."