Key senators and the White House reached agreement on an immigration overhaul that would grant quick legal status to millions of illegal immigrants already in the U.S. and fortify the border. 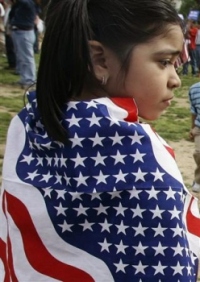 The plan would create a temporary worker program to bring new arrivals to the U.S. A separate program would cover agricultural workers. New high-tech enforcement measures also would be instituted to verify that workers are here legally.

The compromise came after weeks of painstaking closed-door negotiations that brought the most liberal Democrats and the most conservative Republicans together with President George W. Bush's Cabinet officers to produce a highly complex measure that carries heavy political consequences.

The accord sets the stage for what promises to be a bruising battle next week in the Senate on one of Bush's top non-war priorities.

The key breakthrough came when negotiators struck a bargain on a so-called "point system" that would for the first time prioritize immigrants' education and skill level over family connections in deciding how to award green cards.

The draft bill "gives a path out of the shadows and toward legal status for those who are currently here" illegally, said Demcoratic Sen. Dianne Feinstein.

A spokesman for Republican Sen. Jon Kyl., one of his party's key players in the talks, confirmed that the group had reached agreement.

The proposed agreement would allow illegal immigrants to come forward and obtain a "Z visa" and after paying fees and a $5,000 (EUR3,699) fine ultimately get on track for permanent residency, which could take between eight and 13 years. Heads of household would have to return to their home countries first.

They could come forward right away to claim a probationary card that would let them live and work legally in the U.S., but could not begin the path to permanent residency or citizenship until border security improvements and the high-tech worker identification program were completed.

A new temporary guest worker program would also have to wait until those so-called "triggers" had been activated.

Those workers would have to return home after work stints of two years, with little opportunity to gain permanent legal status or ever become U.S. citizens. They could renew their guest worker visas twice, but would be required to leave for a year in between each time.

Democrats had pressed instead for guest workers to be permitted to stay and work indefinitely in the U.S.

In perhaps the most hotly debated change, the proposed plan would shift from an immigration system primarily weighted toward family ties toward one with preferences for people with advanced degrees and sophisticated skills. Republicans have long sought such revisions, which they say are needed to end "chain migration" that harms the economy, while some Democrats and liberal groups say it is an unfair system that rips families apart.

Family connections alone would no longer be enough to qualify for a green card  except for spouses and minor children of U.S. citizens.

New limits would apply to U.S. citizens seeking to bring foreign-born parents into the country.