Premier Romano Prodi marked his first anniversary in office, defying critics who said his center-left government was too weak to survive. Beyond that, the Italian leader has little reason to celebrate. 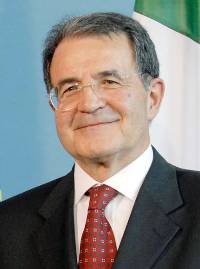 His coalition fared poorly in local Sicilian elections last weekend; proposed legislation on conflicts of interest spurred the latest public bickering among his allies and a poll shows that a majority of Italians think the government has not done a good job in its first year in office.

"Birthday Without a Toast," Corriere della Sera said in a front-page editorial published exactly 12 months into the government's five-year term. "That's Not The Way," said L'Unita, a center-left paper close to the coalition's largest party.

On the positive side, Prodi has managed to stay in office against the odds.

The premier has the narrowest of margins in the Senate, meaning that virtually any defection can bring about a defeat in the upper house. His allies _ a mixed group ranging from Christian Democrats to Communists and anti-Vatican secularists _ have different views on key policies and are not always willing to sacrifice their positions to safeguard the coalition.

Surviving a full term will mean governing until 2011 when parliamentary elections are scheduled, and Prodi said he intended to go the distance, not an easy goal in Italy's traditionally fractious political atmosphere.

"I began thinking about 2011, and I'm still thinking about it," Prodi told reporters at a news conference on the one-year anniversary. "You have to be in the government to do things, not to last, but the more you do, the longer you last."

"His greatest success is survival. Nobody gave him a big chance," said James Walston, a political science professor at the American University in Rome. "Despite difficulties, he's reasonably secure in his position."

Souring Prodi's anniversary was a poll showing that 55 percent of Italians view the government's performance negatively, while 42 percent said it has been positive and 3 percent did not know.

The result was mainly due to dissatisfaction over fiscal measures, an amnesty law that was one of the first acts of the Cabinet and more lax immigration policies, said the leading financial daily Il Sole 24 Ore, which published the poll.

The poll of about 1,000 contacted by telephone on Monday had a margin of error of between 0.6 and 3.1 percentage points, according to the IPSOS institute that conducted it.

Prodi took office in May 2004, after a tight election gave his coalition a very narrow margin over Silvio Berlusconi's conservatives. The premier resigned briefly in February following a parliamentary defeat on foreign policy, and was forced to seek a new vote of confidence.

He pledged unity, but what followed was more division.

The latest example came this week, when a centrist ally said he would not back legislation over conflict of interest. The issue is especially delicate here because of Berlusconi, the former premier and current opposition leader who is also Italy's richest man and biggest media magnate.

Last week, two Cabinet ministers attended a huge rally against a government-proposed bill giving many rights to unmarried couples, while three others went to a counter-demonstration in defense of those measures.

"If one goes through the controversies that have stormed the path of the majority in these months, one will have the impression of an exhausting and endless guerrilla warfare," Corriere della Sera wrote.

Prodi has vowed sweeping economic reforms in 2007, but has yet to deliver crucial ones, including on the pension system.

However, a series of measures aimed at liberalizing sectors of the economy, from gas stations to pharmacies, has been generally well received by economists and the public, even if they spurred the protests of the concerned professional categories.

In foreign policy, Prodi kept a campaign promise and removed the last of Italy's troops from Iraq but was able to stay the course in Afghanistan, keeping Italy's 2,000 troops there despite calls for a pullout from coalition leftists and demands of a troop increase from NATO. The premier also took a leading role in the formation of a peacekeeping force in Lebanon after last summer's violence, sending the largest contingent and taking over command of the force in February.

Prodi faces a major test later this month with local elections across Italy.

Last week his candidates fared poorly in a local election in Sicily, including in Palermo, the island's capital and largest city. Berlusconi said the result was "a notice for the end of Prodi's government," while the premier brushed it off as a local test.

But it will be hard to deny the political significance of the May 27-28 local election, where 10.3 million voters _ about a fourth of the electorate _ are eligible to vote across Italy.