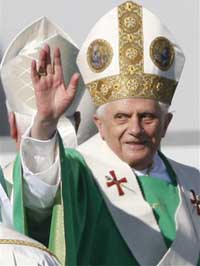 The pope said Sunday that pre-Columbian people of Latin Amercan and the Caribbean were seeking Christ without realizing it. "Christ is the savior for whom they were silently longing," Benedict told a regional conference of bishops in Brazil.

The comments reinforce the view that the pope is "Eurocentric," and fail to account for the fact that Indians were enslaved and killed by the Portuguese and Spanish settlers who forced them to become Catholic, said Paulo Suess, an adviser to Brazil's Indian Missionary Council, which is supported by the Roman Catholic Church.

Benedict "is a good theologian, but it seems he missed some history classes," Suess said.

The pope told Latin American and Caribbean bishops that, "the proclamation of Jesus and of his Gospel did not at any point involve an alienation of the pre-Columbus cultures, nor was it the imposition of a foreign culture."

But Marcio Meira, who is in charge of Brazil's federal Indian Bureau, said Indians were forced to convert to Catholicism as the result of a "colonial process."

"As an anthropologist and a historian I feel obliged to say that, yes, in the past 500 years there was an imposition of the Catholic religion to the indigenous people," Meira said.

In Guatemala, where 42 percent of the nation's 12 million people call themselves Indian, the former presidential commissioner on racism said the pope's comments were a step backward.

"To say that there was no imposition is a falsification in light of the history if those that do not accept the faith were flagellated," said Ricardo Cajas.

In Brazil, many of an estimated 2,000 Indian tribes have died off or assimilated into the general population since the nation was settled by the Portuguese in the 16th century, according to the Indian Missionary Council. Brazil's 2000 census found about 700,000 Indians in Latin America's most populous country.

Benedict made the comments while talking about the history of the Roman Catholic Church in Latin America, saying indigenous Latin Americans formed "a synthesis between their cultures and the Christian faith which the missionaries were offering them."

He added that any return by those indigenous populations to their original religions "would be a step back."

Suess said the pope's comments were not a surprise because he made similar statements while he was a high-ranking cardinal.