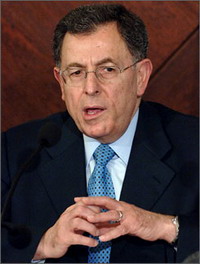 Fuad Saniora sent a letter to U.N. Secretary-General Ban Ki-Moon asking that the tribunal be established, Information Minister Ghazi Aridi told reporters after Saniora met with some Cabinet members about the issue.

The request follows Saniora's failure to win opposition support for the international court.

Saniora's move, which effectively bypasses the divided legislature, is bound to further deepen a fierce power struggle between the prime minister's Western-backed government and the Hezbollah-led opposition.

The issue of an international tribunal that would try suspects in the 2005 assassination of Hariri has sharply polarized Lebanon. It is at the core of a deep political crisis between the government and opposition groups - a conflict that has taken on an increasingly sectarian tone and erupted into street battles, killing 11 people in recent months.

Saniora's letter to Ban is the second in more than a month. On April 10, Saniora sent a letter to Ban asking the Security Council "to study alternative means and ways that will lead, without any delay, to the creation of the tribunal." In that letter, he also accused the opposition-ally Parliament Speaker Nabih Berri of "paralyzing" the assembly because he refused to convene a session to ratify the tribunal.

In his letter Monday, Saniora again blamed Berri for parliament's failure to ratify the tribunal and demanded the Security Council issue "a binding decision" on the tribune.

"For all practical purposes the domestic route to ratification had reached a dead end, with no prospect for a meeting of parliament to complete formal ratification," Saniora said in his letter written in English, a copy of which was faxed to The Associated Press.

"We therefore ask you, as a matter of urgency, to put before the Security Council our request that the Special Tribunal be put into effect," he wrote.

The Iranian- and Syrian-backed militant Hezbollah group, which is leading the anti-government campaign, has warned that Saniora's seeking international intervention would threaten Lebanon's security and stability.

Hezbollah wants to discuss the terms of setting up the court first. Its followers have been camping out in downtown Beirut for months demanding that Saniora's government give the opposition a veto-wielding share in a new Cabinet. Saniora, backed by the majority in parliament, has rejected the demand.

President Emile Lahoud, who favors Syrian involvement in Lebanon, has also warned that Lebanon's unity and stability would be "at stake and severely shaken" if the tribunal was set up by the Security Council.

Hariri and 22 others were killed by a massive truck bombing in Beirut on Feb. 14, 2005 and the Security Council authorized a commission to investigate the assassinations.

A 2005 report by a former chief investigator implicated Syrian and Lebanese intelligence services in Hariri's assassination. Syria denied any involvement but was forced to withdraw its troops from Lebanon, ending a 29-year presence. Four pro-Syrian Lebanese generals, accused of involvement in Hariri's murder, have been under arrest for 15 months.

It was not immediately known if the tribunal would eventually be set up under a U.N. section that deals with threats to international peace and security - a key demand of many members of the anti-Syrian coalition.