Thai Prime Minister Thaksin Shinawatra's wife went on trial Monday on charges of tax evasion, in the first corruption-related case to be prosecuted against his inner circle. 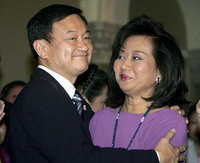 Separately, a special government committee recommended Monday that Thaksin and his wife, Pojaman, be prosecuted over her purchase of land in Bangkok at a favorable price from a semi-official agency.

Pojaman, her brother and her secretary are being tried on charges of evading millions of baht (dollars; euro) in taxes related to a 1997 transfer of shares in the family's flagship business, which became Thailand's biggest telecommunications company.

Pojaman could face 14 years in prison if convicted. All three have pleaded innocent.

Lawyers for Pojaman successfully sought a delay until May 25 to give them more time to prepare evidence and witnesses for their defense.

Thaksin was ousted last Sept. 19 in a military coup. Coup leaders cited corruption as a justification for his ouster, and have faced strong criticism for being slow to prove their allegations, many of which are still being investigated.

Thaksin was in New York when the coup took place, and coup leaders have told him not to return for the time being.

Pojaman has kept Bangkok as her primary residence, periodically joining her husband on trips to other Asian countries and at an apartment they own in London.

The case centers on a 1997 transfer of shares in Shinawatra Computer, the company that later became the family's telecommunications empire, which was sold last year to a Singapore state-owned company for US$2.2 billion.

An investigation by the Assets Examination Committee found that Thaksin's wife and her brother had to pay back taxes of about 546 million baht (US$17 million or 12.6 million EUR at current exchange rates) on the share transfer.

The committee was appointed by coup leaders to investigate alleged corruption linked to Thaksin's administration.

Investigators ruled that Pojaman and her brother misrepresented the nature of the share purchase to avoid paying taxes.

Thaksin was not implicated in the tax evasion case. His first of two terms as prime minister began in 2001.

In the real estate case, the Assets Examination Committee decided to recommend to prosecutors that Thaksin and his wife be brought before the Supreme Court on charges of conflict of interest and malfeasance.

The case involves Pojaman's 2003 purchase of some prime Bangkok real estate from the Financial Institutions Development Fund, a state rescue fund directed by the central bank.

An anti-corruption law bars prime ministers or their spouses from doing business with a government agency, and the Assets Examination Committee said Thaksin as prime minister ultimately oversaw the FIDF.

The conflict of interest and malfeasance charges each carry a maximum penalty of 10 years in prison.

If the prosecutor agrees to take the case and the court accepts it, a special section of the Supreme Court that handles cases of political office holders would hear it, and its ruling would be final.