A Danish soldier was killed, the other five and an Iraqi interpreter were injured by a roadside bomb and ensuing gun battle Monday in southern Iraq. 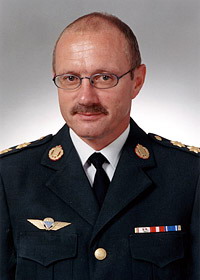 A convoy of Danish army vehicles was on a routine patrol near Basra when the bomb exploded, killing one soldier and injuring two others, army officials said.

Three further Danish soldiers and the interpreter were injured as the unit came under small arms fire following the explosion, said Maj. Kim Gruenberger of the Danish Army Operational Command. The injured were in stable condition.

Seven Danish soldiers have now been killed in Iraq since the U.S.-led invasion in 2003 - four of them by roadside bombs.

In February, the Danish government announced it would withdraw its 460-strong contingent from Basra by August and replace it with a smaller helicopter unit.