The EU considered prospects Monday for improving its strained relations with Russia - four days before German Chancellor Angela Merkel is to lead an EU delegation in talks with President Vladimir Putin. 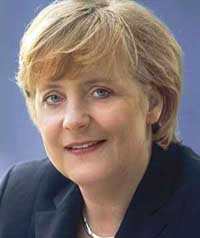 Merkel, whose country holds the EU presidency, is to see Putin Friday in the Russian city of Samara at a time when bilateral relations have soured so badly that some are questioning whether the meeting will be held at all.

German diplomats said German Foreign Minister Frank-Walter Steinmeier will pay an unscheduled visit to Moscow Tuesday for talks with his Russian counterpart, Sergey Lavrov. They did not elaborate.

On arrival at the EU foreign ministers meeting earlier Monday, Steinmeier told reporters, "There are quite a few problems that need to be overcome and that do not make (Friday's EU-Russia) summit an easy one."

The EU foreign ministers will assess if it even makes sense to have an EU-Russia summit.

"We have to finish discussing if the summit should take place at all," Steinmeier said.

He said it was "important to talk" to Russia because both need one another. "That makes me convinced both sides must work for a return to common sense," Steinmeier said.

The EU and Russia are stuck in a tangle of disputes that mirrors the downturn in U.S.-Russian relations. On Monday, U.S. Secretary of State Condoleezza Rice was to hold talks with Russian officials in Moscow.

Putin is troubled by the U.S. proposal for a missile defense system in ex-Soviet satellite countries. Russia also disagrees with international partners over the current draft of a U.N. plan to give the southern Serbian province of Kosovo internationally supervised independence. And it is also threatening to freeze its compliance with a European conventional arms treaty.

Russia's increasing control of oil and natural gas supplies is also causing concern in western European capitals that are already upset by Russia's 2005 ban on meat and plant imports from Poland over what Moscow says are concerns hygiene concerns. Last month, Poland threatened to veto the EU-Russia summit over the import ban.

That trade dispute is also blocking the EU from beginning talks on a long-delayed "strategic partnership" with Russia, which the EU sees as a tool to get Moscow to commit to fair trade in energy.

In the EU view, by opening its vast energy sector to the EU and other investors, Russia will secure a major upgrade of its oil and gas pipelines, and the EU gets access to secure and affordable energy for the future.

Russia tightened its grip Saturday on natural gas supplies from Central Asia by striking a deal with Turkmenistan and Kazakhstan to build a pipeline that would pump their gas into Russia's network of pipelines to Europe.

The new gas agreements are a blow to U.S. and European efforts to construct oil and gas pipelines from Central Asia that would cross under the Caspian Sea, avoiding Russia, and connect to Europe through Azerbaijan and Turkey.

The deal means Russia will control the bulk of Central Asian energy exports, boosting its role as a major supplier of oil and gas to Europe and strengthening Western fears that Moscow could use its energy clout for political purposes.