The White House said in a statement that it deplored increasing arrests of political activists in Vietnam "for activities well within their right to peaceful expression of political thought." 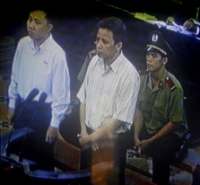 On Friday, a court in Vietnam sentenced two human rights lawyers, bringing to five the number of activists convicted this week in the country's latest suppression of dissent.

"Such repression of individuals for their views is anachronistic and out of keeping with Vietnam's desire to prosper, modernize and take a more prominent role in world affairs," the statement said.

Al-Bunni, a lawyer who had spoken out about torture in Syrian prisons, received a five-year prison sentence April 24 on charges of spreading false news that could weaken national morale and contacting a foreign country.

Labwani, the head of a pro-democracy group, was arrested after meeting with White House officials two years ago. On Thursday, he was convicted and sentenced to 12 years in prison.

"These developments demonstrate that the Assad regime in Syria continues to suppress dissent and crack down on those who peacefully seek to defend their rights and bring democratic reform to their country," the statement said.