Judges examining a smear scandal that targeted Nicolas Sarkozy searched the office of one of his lawyers Friday but were blocked by staff when they tried to enter offices of a leading satirical weekly. 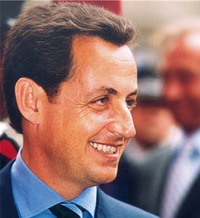 Sarkozy filed a suit following the allegations and judges Thomas Cassuto and Francoise Desset are investigating accusations of violation of judicial secrets relating to the original inquiry.

On Friday, Desset and a judicial expert briefly searched the office of Sarkozy lawyer Thierry Herzog, a judicial official said on condition of anonymity because officials are not authorized to speak to the media about investigations.

Desset was seeking to verify the lawyer's fax machine to see if it had been the source of documents sent to the Canard Enchaine satirical and investigative weekly, which has reported extensively on the Clearstream case, the official said.

Herzog called the search "a provocation" but said it was very short.

Meanwhile, Judge Cassuto tried to enter the offices of Canard Enchaine. Journalists blocked him from entering the editorial floor, and the judge left with nothing, said Canard Enchaine staffer Herve Liffran.

Several media defense groups complained about the search. In a statement, the National Federation of the French Press said "any obstacle to a journalist's doing his job is a restriction on the freedom to inform" the public, the group said. The group called for the incoming government to put an end to such searches.

Sarkozy and other well-known figures appeared on a bogus list of names of people and entities that allegedly had laundered kickbacks from a 1991 defense contract through Luxembourg clearing house Clearstream.

Sarkozy takes over the French presidency next week.