Three Indian officials, South Korean steel company workers, were taken hostage Friday by activists opposed to the company's plan to build a plant in eastern India which would displace thousands of people. 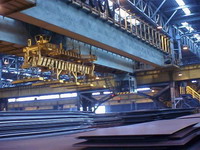 The Posco officials had traveled to the village of Gobindapur in the eastern state of Orissa to meet with farmers about acquiring land when they were kidnapped, additional superintendent of police R.N. Patra said.

One of the three officials has been released but the other two are still being held, he said. South Korea based-Posco is the word's third largest steel-maker.

Abhay Sahu, the president of an activist group dedicated to fighting the Posco project, told the Press Trust of India news agency the hostages would not be released until the company pledged not to develop the site.

However, Patra said Posco official Rosalyn Parida had been released.

Police identified the other two as Debasish Swain, an executive, and Choudry Prapap Das, a public relations officer.

Posco officials could not immediately be reached for comment.

Posco's steel plant - which would be the largest single foreign investment in India - was approved by the Indian government last year as a special economic zone, making it eligible for tax breaks and exempt from some government duties.

Posco has said it will invest about US$10.8 billion (8.01 billion EUR) to build the plant and develop the area as a special economic zone, which will also allow other export-oriented activities.

Many residents are strongly opposed to the project because they say it would require the displacement of about 20,000 people.

Patra said the Posco officials had been warned by residents not to enter their villages without permission, but the three did not heed the warning.

The development of special economic zones in India have sparked fierce protests in recent months.