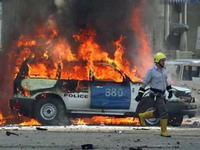 The blasts struck in quick succession at about 6 p.m. in the Zafaraniyah area of southeastern Baghdad, shattering the calm of the traditional Islamic day of rest.

The violence started when the driver of a Sedan plowed into police cars parked near a bridge where a checkpoint was being established. That was followed within minutes by the explosion of a fuel truck near another nearby bridge, police said.

The explosions occurred three hours after the end of a weekly driving ban aimed at preventing such attacks during Friday prayers in Baghdad.