Pope Benedict XVI urged tens of thousands of young Catholics packing a soccer stadium to resist the temptations of wealth, power and other "snares of evil," and told them to promote life from "its beginning to natural end." 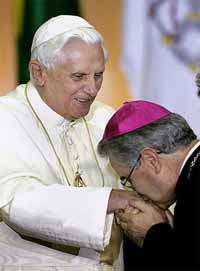 The references to church prohibitions against abortion and euthanasia came Thursday in Benedict's first major speech since arriving in Brazil, the world's largest Catholic country, on his first pilgrimage to Latin America.

While he made no mention of the church's battle against Brazil's free distribution on condoms to combat AIDS, he touched on sexual themes with a call for fidelity between spouses and chastity "both within and outside marriage" - church language for responsible sex.

"Seek to resist forcefully the snares of evil that are found in many contexts," Benedict told the crowd of some 40,000, with thousands more camped outside the stadium.

His warnings against drug use, violence, corruption and the temptations of wealth and power were sure to sound across the region, while his condemnation of the "devastation of the environment of the Amazon Basin" was particularly important in Brazil, where Catholic activists have been working with the landless - at times at odds with the Vatican.

Before the pope arrived at the stadium, a man clad in a white robe took the stage and asked people in the crowd to stand and raise their right hands. "Yes to life!" the man shouted and the crowd repeated. "No to abortion!"

Traditional Brazilian dancers entertained the 80-year-old pope, who was wearing a red cape against the evening chill. At one point, five young people came up to the stage and hugged the pontiff.

The crowd burst into a loud cheer when Benedict mentioned the name of his predecessor, Pope John Paul II, who visited Brazil three times, the final trip in 1997.

But they also shouted, "I love you," when Benedict finished talking.

With abortion becoming a major issue on the trip, the Vatican released a transcript Thursday that seemed to roll back the pope's comments a day earlier on the excommunication of lawmakers who vote in favor of legalizing abortion.

Asked during an in-flight news conference Wednesday if legislators who legalized abortion in Mexico City should rightfully be considered excommunicated, Benedict said "Yes."

"The excommunication was not something arbitrary. It is part of the (canon law) code," the pope continued, seemingly siding with the Mexican bishops who said the politicians had excommunicated themselves.

But Benedict's spokesman, the Rev. Federico Lombardi, later said Benedict did not intend to formally excommunicate anyone - a rare process under church law - and on Thursday the Vatican released a slightly edited transcript that dropped the word "yes" in the pope's response.

Lombardi told reporters such edits are common. "Every time the pope speaks off-the-cuff the Secretariat of State reviews and cleans up his remarks," he said.

Still, Benedict's comments stoked debate among Catholics who have been arguing whether politicians who approve abortion legislation, as wellas doctors and nurses who take part in the procedure, subject themselves to automatic excommunication under church law.

Some of the Mexican legislators involved said they still consider themselves to be Catholic _ no matter what the pope says. And in the United States, Republican presidential candidate Rudy Giuliani _ a Catholic who favors abortion rights - tried to steer clear of the controversy. "I do not get into debates with the pope, that is not a good idea," Giuliani said.

Asked again Thursday whether the church will use the threat of excommunication against politicians thinking of legalizing abortion, Lombardi said that the pope has called on all Catholics to have a "Christian behavior, coherent with his faith and vision of life."

"When this is not the case, then comes the problem of the true participation in the life of the church and also in the Eucharist," Lombardi said. "This is the question. Are we coherent with our Christian vision? If yes, we can participate. If no, there is a problem."

The flurry of papal statements and revisions left many puzzled. Some newspapers in Brazil and Mexico declared Benedict approves of excommunication for politicians who support abortion rights, while others said exactly the opposite - that he had ruled it out.

The controversy did not help persuade some of the Brazilians waiting for a glimpse of the pope.

"I'm totally against his stance on abortion," said Roberto Tavares, a retired airline pilot. "I have two daughters and we know how Sao Paulo is. If something happened to them, and they were raped, I would never let them have a baby that way."

Many Catholics share the pope's views, however _ polls show Brazilians are overwhelmingly against expanding access to abortion beyond current law, which allows it in cases of rape or when the mother's life is in danger.

Silva says he is personally opposed to abortion, but that it is an issue for his government because many Brazilian women die from illegal abortions, highlighting the divide among those torn between the church's traditional teachings and the pressures of the modern world.

Silva did tell the pope in the close-door meeting that Brazil wants to help Africa develop biofuels as a way to ease poverty, local news media reported. Brazil is the world leader in developing ethanol from sugarcane and the only major exporter of the alternative fuel.

Brazil's ambassador to the Vatican, Vera Machado, told the Agencia Estado news agency that the pope said he did not know much about biofuels but appreciated any help for Africa.

The pope also met Thursday with Brazilian religious leaders, including members of the local Jewish and Islamic communities. The Muslim representative gave his white cape to the pope, describing the gift as a "gesture of brotherhood," Lombardi said.

There were no representatives from Protestant evangelical churches, which have attracted millions of Catholics in recent years. Vatican officials said they have no official relations with those churches.