Egypt's antiquities chief told that if persuasion doesn't work, he will fight for an ancient bust of Nefertiti now in a Berlin museum that Germany says is too fragile to loan to Egypt. 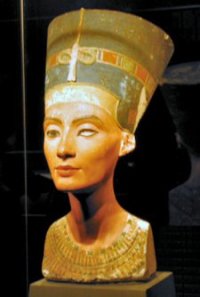 Zahi Hawass rattled the world's museums last week with requests to hand over masterpieces of ancient Egypt, including the Rosetta Stone some for loans, others permanently.

Hawass said in the interview Wednesday that the goal is to display the pieces in two new museums, particularly the Grand Museum, which is opening in 2012 next to the Great Pyramids of Giza and it to be Egypt's main antiquities showcase.

But the bombastic archaeologist known for the Indiana Jones-style hat he wears as he unveils new discoveries has met resistance from museums reluctant to part with their most prized artifacts.

"Some people say, 'If we give this bust to Egypt for three months they will not return it,"' Hawass said, regarding the bust of Nefertiti. "I say: We are not the pirates of the Caribbean. We are in the 21st century, we have cooperation with all the countries and who respect our work."

At the top of his list of requests for loans are the famed 3,300-year-old bust of Nefertiti the wife of the pharaoh Akhenaten, now at Berlin's Egyptian Museum and the Rosetta Stone at London's British Museum a 1,680 pound slab of black basalt with an inscription that was the key to deciphering ancient Egyptian hieroglyphics.

But Hawass said Egypt was seeking "unique artifacts" from at least 10 museums around the world, including the Louvre in Paris and Boston's Museum of Fine Arts.

"We would like these 10 pieces to be at the opening of the Grand Museum in the year 2012 to invite everyone to show the whole world the cooperation between all of us," he said.

But while he touted cooperation, he also threatened that if Berlin rejects a loan, he will prove the bust was stolen and seek to bring it back to Egypt permanently.

"If Berlin will not agree to give us the loan, we will fight back to bring this bust for good," Hawass said.

Dietrich Wildung, head of Berlin's Egyptian Museum Berlin, said German officials have for years insisted the 3,000-year-old bust is too fragile to travel. "The structure of Nefertiti's material, plaster over limestone, is very sensitive," he told Associated Press Television News.

"Our Egyptian colleagues know very well that Nefertiti will never leave Berlin for two reasons: Firstly, due to reasons of conservation ... Secondly, for security reasons. Given the current international political situation, it would be completely irresponsible to allow such a piece of art to travel such a far distance," Wildung said.

"I'm going to give them all the guarantees, insurance, transportation, guarantee completely that the bust will come safe," he said.

Besides the Grand Museum, Egypt is also seeking pieces for the 2010 debut of the Atum Museum in the Nile Delta city of Meniya.

But it is not clear what Egypt can do to win even a temporary handover of the artifacts beyond public pressure. Hawass has sought UNESCO's help in retrieving them. Another recourse would be courts in the museum's countries but that would mean a costly legal battle whose outcome is uncertain.

The British Museum told AP on Thursday that it has received the letter from Hawass seeking a loan of the Rosetta stone and that the request would go to the museum's trustees for consideration.

"We have received the letter ... and will consider it at the appropriate moment," said Hannah Boulton, a museum spokeswoman. Boulton said the museum loans many objects but must take into consideration a number of factors including where the item is going, for how long, as well as its popularity and fitness for travel.

A spokeswoman for the Louvre said the museum had also received Hawass' letter requesting a zodiac ceiling painting from the Dendera Temple. "We will treat it, as well as any other loan request," Bйnйdicte Moreau said Thursday in a written statement.

Hawass has also sent letters requesting the bust of Anchhaf the builder of the Chephren Pyramid from Boston's Museum of Fine Arts, and the statue of Hemiunu the nephew and vizier of the pharaoh Khufu, builder of the largest pyramid in Germany's Roemer-Pelizaeu museum.

Hawass also said he is requesting items from the New York's Metropolitan Museum of Art and Italy's Turin Museum.

One of Hawass' most bitter ongoing battles is with the St. Louis Art Museum over the 3,200-year-old funerary mask of Ka Nefer Nefer, which depicts a young lady. He has threatened the museum repeatedly for not heeding his requests to return the item and says he has documentation that proves it was stolen from Egypt in 1913.

"We want to tell the whole world about this crime that the museum of St. Louis is doing and even wrote the children in St. Louis to tell them, Don't go to this museum because it has a stolen artifact," Hawass said Wednesday.

The St. Louis museum says it bought the mask from a dealer in 1998 for about $500,000 after checking with authorities and the international Art Loss Register to see if the item was stolen. The museum also approved the purchase with the Egyptian Museum, Saint Louis museum director Brent Benjamin has said.

For years Hawass has sought the retrieval of items he says were stolen from Egypt, with recent success in the return from France of stolen hair from the mummy of Ramses II.