African peacekeepers in Somalia have not got salaries because the AU has provided no funding since they were deployed to the war-scarred country in March. 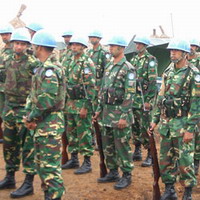 Paddy Ankunda, spokesman for the Ugandans deployed in Somalia as peacekeepers, said the Ugandan government has been paying the expenses of the deployment and also was making some contribution toward soldiers' welfare, in hopes of one day being reimbursed by the African Union, which authorized the force. He did not offer further details.

"It is true that we are in the third month and we have not been paid," Ankunda said. He called on the international community to send resources so the AU mission in Somalia could be maintained.

"We are facing financial troubles," Ankunda said. The "Ugandan government pays a lot of money for our operation and welfare."

He said there was no plan for the troops to leave, though. "We will bear with the money problem," he said.

AU spokesman Assnae Ba said the organization had not yet received money pledged by donors to the peacekeeping mission in Somalia, but added that the AU would repay any money Uganda spends on its troops, including pre-deployment expenses.