A key meeting between Nepal's prime minister and leaders of the eight-party ruling coalition was postponed, setting back the efforts to move the country's political process forward. 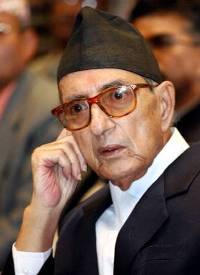 The meeting between Prime Minister Girija Prasad Koirala and party leaders, including former rebels, was to have discussed a timetable for elections and ongoing political violence in the country.

But the meeting had to be postponed, possibly to Saturday, as there were more preparations to make, said Amik Sherchan of the People's Front, one of the smaller parties in the coalition.

Koirala was, however, able to meet with leaders of the three smallest parties, including the People's Front, Sherchan said.

The parties had agreed to June 20 as an election date before forming the coalition government on April 1. But they have since differed over the date for the vote, which will select a special assembly to rewrite the country's constitution and decide on a political system for Nepal, currently a constitutional monarchy.

Other issues to be discussed included continued violence allegedly carried out by Maoist rebels, even after they renounced their decade-long armed struggle to turn the country into a republic and joined the government last month.

After weeks of nationwide pro-democracy protests, King Gyanendra announced on April 26, 2006, he was giving up his direct rule and restoring Parliament. He seized absolute power on Feb. 1, 2005, citing the failure of political parties in successive governments to restore security and conduct elections.

The Maoists joined the government after entering a peace process last year. They locked up their fighters and weapons in United Nations-monitored camps, signed a peace deal, and became part of the interim Parliament.

They have, however, been accused of continued violence and extortion.