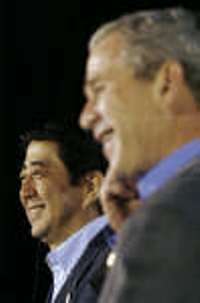 To befit close alliance between USA and Japan and to relax first-name basis Japanese Prime Minister and American president munched during the first U.S. visit of Abe. It is called cheeseburger diplomacy.

"President Bush and I were able to deepen our friendship and trust - in fact, we are now on a first-name basis, calling each other 'George' and 'Shinzo,"' Prime Minister Shinzo Abe wrote Thursday in his e-mail newsletter of his April 26-27 American visit.

Bush even sealed the bond with a lunch of "quintessentially American fare, a large cheeseburger," said the Japanese leader, himself a known ice cream fanatic.

Abe and his wife, Akie, were also given a personal tour of the White House where Bush showed them furniture presented by Japan in the 1800s after Japan and the U.S. signed their first trade treaty and established relations.

"I felt a surge of emotion when I realized that this furniture had watched over the progress of Japan-U.S. relations for over 150 years," Abe said, adding they also "chatted about the outstanding performance of Japanese baseball players in the Major League."

Abe's trip was seen as an important step in reaffirming ties between the two nations, which are top trading partners and important military allies.

Bush had a close relationship with Abe's predecessor, Junichiro Koizumi, but this was Abe's first U.S. trip since taking office in September 2006.

Less than a year ago, then-Prime Minister Koizumi attended a summit in the U.S. at the height of his popularity, even making a side trip with Bush to Elvis Presley's Graceland mansion in the state of Tennessee, where he won over his hosts with an Elvis impersonation.

The more staid Abe has been battling at home to boost a slumping approval rate. Attempts to highlight his own bonds with Bush could tap the spirit of his predecessor and solidify understanding on shared foreign policy agendas such as cooperation in the North Korean nuclear standoff and the war on terror.

"Both President Bush and the leaders ofCongress voiced their agreement over broadening and deepening advances in the irreplaceable Japan-U.S. Alliance, building on our unshakable partnership," Abe said.