A Japanese hospital opened the country's only anonymous drop box for unwanted infants Thursday despite government admonitions against abandoning babies. 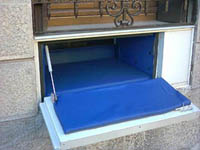 The baby drop-off, called "Crane's Cradle," was opened by the Catholic-run Jikei Hospital in the southern city of Kumamoto as a way to discourage abortions and the abandonment of infants in unsafe public places. The hospital described it as a parent's last resort.

A small hatch on the side of the hospital allows people to drop off babies into an incubator 24 hours a day. An alarm would notify hospital staff of any new arrival. The infants will initially be cared for by the hospital and then put up for adoption.

"We started the service but hope it won't be used," head nurse Yukiko Tajiri said. "I hope it is seen as a symbol that we are always here for parents to share their difficulty."

But government officials warned the service might only encourage more abandonments.

"In principle, parents should not abandon their babies anonymously," Prime Minister Shinzo Abe told reporters Thursday. Chief Cabinet Secretary Yasuhisa Shiozaki said it was "fundamental for parents to raise their children with their own hands."

Similar baby drops exist in Germany and South Africa. Some U.S. states, such as Alabama and Minnesota, also have programs that protect the identities of women who give up their babies.

An drop box had been in operation years ago near Tokyo, a local news report said. It received only 10 babies in six years, the Mainichi newspapers said.

It was closed in 1992 after a dead child was found inside, the report said.

The latest drop box comes after a series of high-profile cases in which newborn babies were left behind in parks and supermarkets triggering a public outcry.

With no law against abortions and no clear religious taboos in predominantly Buddhist Japan, the procedure is readily available and widespread.

Nearly 290,000 cases of abortion were reported in 2005, according to the Health Ministry.