The director of U.S. spy agency that analyzes imagery from the skies says the increasing availability of commercial satellite photos may require the government to restrict distribution. 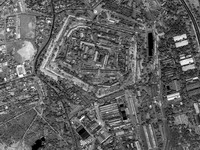 "If there was a situation where any imagery products were being used by adversaries to kill Americans, I think we should act," Vice Adm. Robert Murrett, director of the National Geospatial-Intelligence Agency, said Tuesday in a rare interview at his office in Bethesda, Maryland.

"I could certainly foresee circumstances in which we would not want imagery to be openly disseminated of a sensitive site of any type, whether it is here or overseas," he said.

Murrett oversees a growing intelligence discipline known as geospatial intelligence. It is the study of imagery, such as satellite pictures or video taken from aircraft, to discern features or activities happening anywhere on the planet.

A part of the U.S. Defense Department, his agency usually operates unnoticed to provide information on insurgencies, nuclear sites, terror camps or troop movements. In the United States, the agency is increasingly getting into the business of helping after natural disasters such as this week's tornadoes in the Midwest, or for events that require heightened security such as President George W. Bush's Sunday trip to Jamestown, Virginia, for the 400th anniversary of the founding of the first permanent English settlement in the Americas.

Throughout the Cold War, U.S. spy satellites were secret military assets. But in the late 1990s, commercial companies got into the game. Two U.S. companies, Digital Globe and Geoeye, now launch commercial satellites and distribute their images, and they have growing competition from overseas.

With the help of about $1 billion (740 million EUR) from Murrett's agency, the companies plan to launch new satellites to make higher-resolution photographs later this year.

While the public will begin to see crisper images online and elsewhere, government regulations will require the companies to degrade the quality of the imagery to a half-meter resolution. That means items that size are the smallest objects the satellites can detect from their positions, generally a few hundred miles above the earth.

Already, the companies' images are the backbone for Web sites such as Google Earth. Disaster relief agencies, media organizations and other private entities also buy their products.

But the public use of such images can create tension.

During the 2001 invasion to overthrow Afghanistan's Taliban government, the geospatial intelligence agency bought up all the imagery over that countryforseveral months, creating a blackout for private groups at the height of the fighting. The agency was criticized for embarking on "checkbook shutter control" and hampering relief work and public understanding of the fight.

In the past, the agency has said publicly that it does not plan to take such steps again. But Murrett, who took over last summer, clearly sees moments where such information may have to be restricted, especially to protect U.S. forces.

"I think we may need to have some control over things that are disseminated. I don't know if that means buying up all the imagery or not. I think there are probably some other ways you could do it," he said, leaving the specifics to legal and policy experts.

John Pike, a satellite expert with Globalsecurity.org, said the government has been reluctant to invoke restrictions.

"They have a real dilemma," he said. "If the area they are trying to protect is too broad, then surely there would be some news organization that will take them to court on prior restraint or some other freedom-of-the-press infringement."

"If the area that is being protected is too narrowly defined, you are giving away the secret location," Pike said.

Yet Steven Aftergood, a secrecy expert with the Federation of American Scientists, said the growth of commercial satellite companies domestically and internationally may make it impossible for officials like Murrett to restrict the dissemination of imagery.

"I can foresee circumstances where they might wish they could. There can be cases where imagery could jeopardize the security of U.S. military operations," Aftergood said. "But this cat may be out of the bag for good. It's just not clear that the legal or other tools needed to restrict disclosure are available."

The issues are raised as commercial imagery is becoming increasingly valuable to Murrett's agency. It allows government experts to study and disseminate unclassified information to U.S. law enforcement, foreign allies and other partners more rapidly than would be possible if officials only had images from classified satellites. Those shots might betray where those costly U.S. assets operate and the resolutions they can achieve.

Specifically, Murrett said his agency has been increasingly using commercial imagery in Iraq and Afghanistan, as well as to help map and understand the devastation after U.S. disasters like Hurricane Katrina.

That domestic role requires extra work by the agency's legal department, which must ensure the agency is following presidential orders and other rules that prohibit spying on Americans.