A week after an immigration rally ended with police using batons and rubber bullets to get demonstrators and journalists out of a Los Angeles park, activists plan to march again next month to refocus attention on immigration reform. 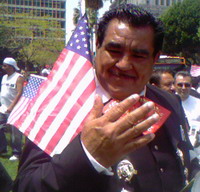 Organizers hope the June 24 march will exceed the crowd of about 25,000 who attended the mostly peaceful May 1 demonstration that ended with riot police sweeping protesters and journalists out of MacArthur Park.

"All of us here today are united in expressing in the clearest voice possible that we can't be intimidated into inaction," said Juan Jose Gutierrez of Latino Movement U.S.A at a press conference outside City Hall.

About a dozen immigrants stood behind him holding signs calling for amnesty for the roughly 12 million illegal immigrants in the United States.

The march is planned for the intersection of Hollywood and Vine, in the heart of Hollywood and far from downtown, where prior immigration rallies have taken place. Gutierrez said the location was chosen to get other Los Angeles neighborhoods involved in the reform movement.

"A community divided is a weak community," Gutierrez said.

There were signs he has had some success in attracting support. Activist Preston Wood, the local coordinator of the anti-war group, the Answer Coalition, attended the press conference and said he would march. So did the Rev. Eric Lee, director of the Southern Christian Leadership Conference of Los Angeles and Filipino-American activist Arturo Garcia.

Honduran activist Cecilia Rodriguez, also at the conference, called for media to cover the event, but not only to get the message out.

"Imagine what would have happened if the cameras weren't there (in MacArthur Park)," she said in Spanish.