The Grammy Awards, reaching its 50th birthday, is finally getting a home of its own. 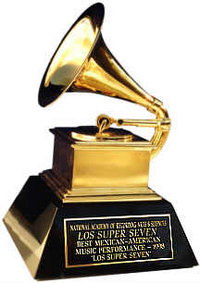 A Grammy museum, now under construction, is scheduled to open in September 2008, across the street from the Staples Center, where next year's 50th annual Grammy Awards will be staged.

"On May 25, 1957, five men gathered at the old Brown Derby in Hollywood and established the National Academy of Recording Arts and Sciences," Academy President Neil Portnow told reporters Tuesday. "A year later, they held their first event, a little sit-down dinner, to honor excellence in recorded music."

A half-century later, the Recording Academy claims some 18,000 members and is laying plans for a yearlong series of events marking the milestone anniversary.

Front and center among them is the 50th annual Grammy Awards, to be broadcast live on CBS from the Staples Center on Feb. 10. Nominees will be announced Dec. 6.

In the meantime, Portnow had some unfinished business to take care of Tuesday, presenting Joss Stone with the Grammy she claimed this year for R&B performance by a duo or group. Stone was unable to attend the awards ceremony on Feb 11.

"It's wicked! I had no idea," the 20-year-old singer, her hair streaked with lavender, said with a grin.

The museum, which is to encompass 30,000 square feet (2,800 square meters), has been in the planning stages for years. It will include a theater and exhibitions.

Feinson's Grammy poster, which Stone unveiled, features hundreds of Grammy photos in a composite image of the Grammy statuette.

Various individuals will also be honored during the year

Among them are legendary soul singer Aretha Franklin, who will receive the MusicCares Person of the Year Award on Feb. 8.

Jones is to receive the Grammy Foundation's Leadership Award on July 28 for a lifetime of music and activism, Portnow said.

"That's one good thing about getting older. You get to see how everything turns out," Jones said, laughing.