Farmed fish were fed meal with an industrial chemical linked to the continuing recall of pet foods, although the contamination level was too low to endanger anyone who may have eaten the fish. 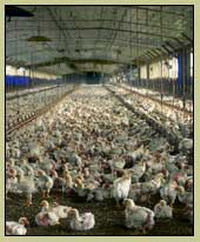 The Canadian-made meal included what was purported to be wheat gluten, a protein source, imported from China. The material actually was wheat flour spiked by the chemical melamine and related, nitrogen-rich compounds to make it appear more protein rich than it was, officials said.

After pigs and chickens, the farmed fish mark the third food animal given contaminated feed. The level of contamination is expected to be too low to pose any danger to human health, said Dr. David Acheson, the federal Food and Drug Administration's assistant commissioner for food protection.

It was not immediately clear whether any of the farmed fish entered the national food supply. Acheson said, however, that at least one firm's fish remained too young and small to be sold. Investigators were visiting other U.S. aquaculture farms that used the contaminated feed.

Melamine, a chemical found in plastics and pesticides and not approved for use in pet or human food in the United States, contaminated pet food that either sickened or killed an unknown number of dogs and cats. Since March 16, more than 100 brands of pet food have been recalled because they were contaminated with melamine.

Acheson said fish samples would be screened for signs of melamine. "Depending upon what we find in that testing, that is going to drive the next steps," Acheson said.

Canadian officials are aware of the finding, Acheson said.

Federal health and food officials have said some 20 million chickens and thousands of hogs also were fed substances contaminated by melamine. As with the fish, they said the risk to human health is very low.

U.S. investigators also have learned that the purported Chinese wheat gluten and a second ingredient, rice protein concentrate, were simple wheat flours. The flour was spiked with melamine and related, nitrogen-rich compounds to make it appear to contain more protein than it did. In tests, nitrogen levels are measured to gauge the overall protein content of food ingredients.

"What we discovered is these are not wheat gluten and rice protein concentrate but in fact are wheat flour contaminated by melamine," Acheson said.

The supposed wheat gluten was exported directly from China to Canada in a deal brokered by a U.S. company, ChemNutra Inc., Acheson said. ChemNutra also supplied the ingredient to a Canadian dog and cat food company, Menu Foods, that since has recalled dozens of brands.

Steve Stern, a ChemNutra spokesman, said the Las Vegas company only co-brokered the deal to supply wheat gluten to the fish meal producer: "We never owned it; we never sold it."

When asked why ChemNutra did not disclose previously that it had had a part in that deal, Stern said the company notified the FDA in mid-April. However, the company chose not to include the co-brokered shipment in an April 2 recall of the wheat gluten it had imported for use in pet food, again because it had not sold the ingredient, he said.

Menu Foods has said it faces more than 50 lawsuits. It in turn has sued ChemNutra. And the FDA has searched facilities belonging to both companies.